The researcher from the University of California, Berkeley (US) has spent a month at the CNIO in a collaboration funded by the Jesús Serra Foundation.

Nogales has recently discovered the mechanism of activity for Taxol, one of the most used anti-tumour drugs

The Spanish biophysicist Eva Nogales, a professor at the University of California, Berkeley (US) and the Lawrence Berkeley National Laboratory, is a global leader in researching the structure of large biological molecules. Her research on the tubulin protein, for example, has recently revealed how the Taxol anti-cancer drug works. Nogales has spent a month at CNIO thanks to the Jesús Serra Foundation’s Visiting Researchers Programme, sharing her experience with the centre’s structural biology groups, at a moment when this area is receiving renewed attention.

Since 2009, collaboration with the Jesús Serra Foundation has allowed for a prestigious international lecturer to be brought to CNIO to stay for several months and, by the end of the trip, to deepen the scientific relationship between the host group and the visiting researcher.

On this occasion, Nogales brought her experience with forefront techniques in structural biology, which have revolutionised the field in just under a year, to CNIO. In exchange, she takes with her: “the possibility of building new collaborations with front-line cancer researchers”, she said. “Tomorrow a CNIO group could develop a new anti-tumour compound that I would like to study, for example”. Nogales will come back for another month in 2015.

Nogales studies “molecular machines that carry out some of the most crucial functions for the survival of the organism”, according to the webpage of the prestigious Howard Huges Medical Institute, which the researcher has belonged to since the year 2000. Nogales studies the 3D structure—the shape—of these molecular machines, key data for understanding what they work in the cell.

One of the molecular machines that has accompanied Nogales throughout her career is tubulin. Microtubules, cylinders that criss-cross and give form to a cell and have a key roll in cell division, are built by the self-assembly of this protein. Nogales, who holds a degree in Physics from Madrid’s Autonomous University, began studying tubulin during her doctorate work at the Daresbury Laboratory in the UK, and then continued after moving to the Lawrence Berkeley National Laboratory in the US in 1993.

In 1998, Nogales published the discovery of the 3D structure of tubulin on the cover of Nature, a challenge pursued by a number of researchers for decades. She succeeded after five years of work with a microscope technique that is part of her speciality, cryo -electron microscopy (cryo- EM).

The discovery of the mechanism of action of the anti-tumoural drug Taxol last May is the latest result of her research into tubulin and microtubules. Nogales and her group, that had already discovered the place where Taxol binds to tubulin, have now managed to visualise microtubules bound to this compound in their natural 3D structure, and thus determined how Taxol blocks the normal assembly and disassembly of microtubules. These process are a key part of cell division, and thus, when Taxol is bound to microtubules, the cell cannot proliferate.

Cryo-EM is a technique that has recently undergone major technical developments and is revolutionising the  field of  structural biology. As Nogales explains, until not so long ago there were only two options for determining the structure of a macromolecule: x-ray crystallography, which implies the difficult or sometimes impossible crystallisation of the protein, and cryo-EM, generally applicable to most macromolecular complexes without the need for crystallisation, but offering—until recently—a much lower resolution. Now, though, thanks to very specific improvements in detector technology, it has become possible to get atomic resolution—to distinguish the position of atoms—using cryo-EM.

“The new detector is allowing us to do in two weeks what used to take us two years”, said Nogales. “There are more and more people doing cryo-EM, including many x-ray crystallographers”. Furthermore, the new technique allows for the visualisation of the proteins as they are moving, in their natural, physiologically relevant form. “It is an enormous change, and very quick”.

One factor that limits the expansion of the technique, however, is the high price of the equipment. Despite that, there are several dozen groups using the new detector—none of them in Spain, where there is still no cryo-EM equipment with the improved detector.

At Nogales’s laboratory in Berkeley, there are fifteen researchers and they have access to two machines that cost several million euros. She is not planning to return to Spain to continue her research, for the moment, but she follows her colleagues’ situation here closely. She wonders: “if the politicians are aware of how much it costs to move forwards in the world of science, and how quickly we go backwards if we lose momentum”. 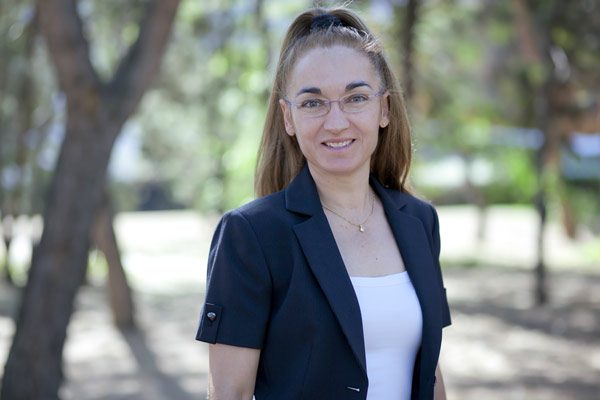