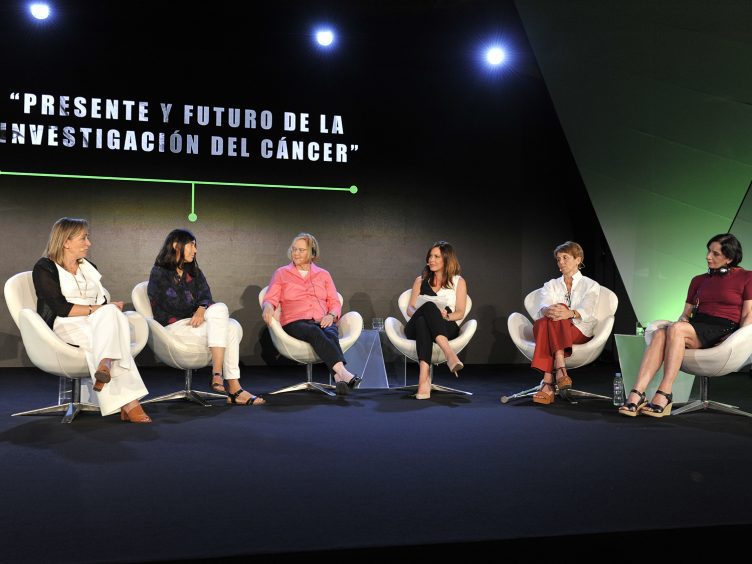 Elizabeth Blackburn, winner of the Nobel Prize in Medicine in 2009 for her co-discovery of the telomerase enzyme, gave a press conference and a lecture

This event, which was open to the public, took place at Cibeles Palace, in Madrid

The winner of the 2009 Nobel Prize in Medicine, Elizabeth Blackburn, visited Spain at the invitation of the Spanish National Cancer Research Centre (CNIO), LaSexta, and Fundación AXA. This exceptional visit to our country by the Australian scientist took place on 24 September to mark World Cancer Research Day, as part of the event ‘Present and Future of Cancer Research’, promoted by CNIO and Constantes y Vitales (the corporate responsibility campaign launched by LaSexta and AXA), and hosted by Mamen Mendizábal.

This event, which was open to the public, took place at Cibeles Palace (Madrid) with Nobel Prize-winner Elizabeth Blackburn as guest of honour. Prof. Blackburn delivered a keynote speech entitled “Resolving Paradoxes in Telomere Biology and Cancers”, reviewing the relationship between cancer and the telomeres, the structures that protect the ends of chromosomes. During the normal process of cell division, telomeres get shorter. After a certain number of divisions, the shortening of telomeres becomes excessive, so that the cell can no longer function normally and stops dividing. In cancer this does not occur because there is an enzyme called telomerase that is active and repairs telomeres, thus allowing tumour cells to proliferate indefinitely. Over the past few years, studies on telomerase have shed a great deal of light on the ageing process and its relationship with cancer. Blackburn’s contribution is an example of how research is decisive in helping to prevent and cure diseases.

Blasco wanted to highlight that “we are celebrating the fact that research is the only path to treating cancer. Since we first started studying its molecular mechanisms, 50 years ago, we have made so much progress: now, more than 50% of cancers are treatable. But this is not enough. There are still 50% of tumours that we do not know how to treat. For some tumour processes, we do not even have drugs, for example in metastasis. This indicates the need to continue to do research”.

The CEO of Atresmedia, Silvio González, said: “For Atresmedia, it gives us great satisfaction to get involved with campaigns in which, as a media group, we have much more access to information”. Jesús Carmona, Managing Director of AXA’s Health Division, said: “at AXA and its Foundation, we are deeply proud to be able to organise this event for the second year running alongside our partner in Constantes y Vitales, LaSexta, and together with CNIO, one of the world’s leading cancer research centres, an organisation we work closely with through the AXA Research Fund”.

The event was brought to a close by Spain’s Minister for Science, Innovation and Universities, Pedro Duque. In his closing remarks Minister Pedro Duque stressed that this event deals with one of the “most important problems we face today”. The Minister thanked Blackburn for her speech and wished that “someday someone will follow in your footsteps, and one of Spain’s women scientists might win a Nobel Prize”.

Elizabeth Blackburn, born in Tasmania, Australia, in 1948, has spent most of her career at the University of California (USA). In 2016, she was appointed President of the prestigious Salk Institute of Biological Sciences. In 2009, she won the Nobel Prize for Physiology or Medicine together with Carol Greider, precisely for their joint discovery of the enzyme telomerase, a finding that opened up a whole new area of research related with ageing, cancer, and age-related diseases in general.