Home | News | CNIO News | Zapatero calls for the creation of a commission of scientists, economists and thinkers to decide which projects should be funded by the European Covid-19 recovery fund

Zapatero calls for the creation of a commission of scientists, economists and thinkers to decide which projects should be funded by the European Covid-19 recovery fund 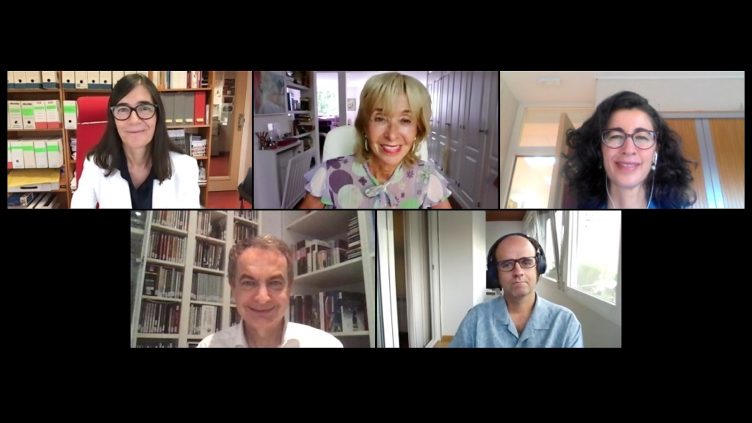 “We know that all crises nowadays are global, so we have to start talking about a global science,” said the former president

“Male chauvinism is still very much present in Spain and we owe it to our children to provide a more fertile ground for equality,” said Rodríguez Zapatero

The former President of the government, José Luis Rodríguez Zapatero, called for the creation of a “high-level” commission made up of scientists, economists, thinkers and technologists, whose criteria are “unquestionable”, to “propose projects to be funded by European recovery funds” due to the effects of the Covid-19 pandemic.

Zapatero, who mentioned that he had passed on this request to the government, made these statements during his talk on Science and politics, organised by the Women in Science (WISE) Office of the Spanish National Cancer Research Centre (CNIO). During his speech, the former president also defended the fact that “it is possible to arrive at a Pact for Science in Spain.” He also noted that “precisely now there is a great opportunity to improve resources for R&D and Innovation with the European recovery funds.”

The former socialist president also expressed his concern that “the political community has no global recovery system for dealing with future crises” of the magnitude of the current Covid-19 crisis.

“We must build international pillars that support global science”

The Covid-19 pandemic has led us “to come closer to a new change in the relationships between health, science and society with a more progressive perspective that will be present throughout the 21st century,” Rodríguez Zapatero stressed. “This change makes global cooperation in science necessary, and we must build international pillars that support science. We know that all crises nowadays are global, so we have to start talking about global science.”

To the vision of science as a way to improve life expectancy and health, Zapatero wanted to add the role that science plays, “based on values and principles, as an element of coexistence.” As such, he highlighted equality between men and women as one of these fundamental principles. “The greatest, most persistent and most brutal discrimination throughout history has been the discrimination against women. The 21st century must be decisive in favour of gender equality.”

Zapatero emphasised in his CNIO talk that male chauvinism is still very present in Spain, “a country that is characterised by institutional male chauvinism, which has pervaded the vast majority of generations; now we owe it to our children to provide a more fertile ground for equality, because love for equality and science are fundamental for the progress of all societies,” the former president stated.

“Feminism is one of the great social advances of the 20th century. We must recognise that the fight against discrimination of women is an authentic contribution of feminism,” the former president added.

“The CNIO’s equality plan is exemplary”

In this context, the former president praised the equality plan of the Spanish National Cancer Research Centre (CNIO), instigated by its director Maria Blasco. Zapatero called the plan “excellent and exemplary.”

When asked by Maria Blasco about the measures that are still needed “to achieve real equality between men and women,” Zapatero replied that “the key is in educating feelings, in having a modern view of the family take the place of conservative and religious values.” He added that the media and social networks also have a responsibility to achieve this equality.

María Teresa Fernández de la Vega, former Vice-President of the government and President of the Council of State, also took part in the question time, and she underlined “the current male chauvinism and inequality in the field of high politics among the great international leaders.” “The male system is so resistant that at a global level we have made very little progress,” asserted Fernández de la Vega.

The speaker also referred during his talk to physical violence against women as “the most appalling expression of dominant machismo and patriarchy.” He stressed that this discrimination is even greater in the case of women with disabilities, among whom 80% do not have access to employment and 50% suffer harassment or some kind of gender-based violence.