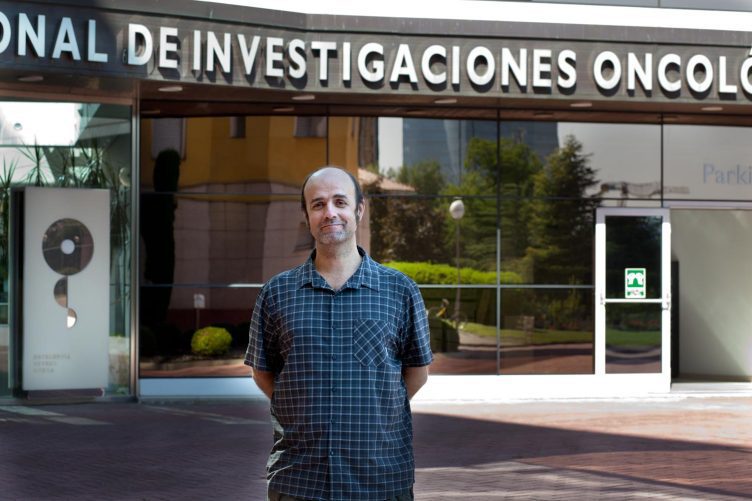 CNIO researcher Óscar Fernández-Capetillo received a European Research Council Proof of Concept Grant valued at 150,000 euros to fund his study of SETD8 inhibitors for a period of 18 months

SETD8 has been found to play a role in the development of neuroblastoma and medulloblastoma, two malignant tumours of childhood with poor prognosis, but the development of drugs that inactivate the protein is still taking place at a slow pace

The team led by Fernández-Capetillo is working on novel SETD8 inhibitors and identifying specific mutations with sensitivity to these drugs, so that treatments can be targeted towards tumours or administered to the patients who are most likely to benefit from them

The ERC Proof of Concept Grant awarded to Óscar Fernández-Capetillo adds to the three ERC Advanced Grants received by Maria Blasco, Marisol Soengas and Mariano Barbacid, the three ERC Consolidator Grants that went to Manuel Valiente, Felipe Cortés and Eva González, and the ERC Starting Grant awarded to Alejo Efeyan. They all highlight the excellence and the innovation potential of the research projects conducted at the CNIO

Óscar Fernández-Capetillo, Head of the Genomic Instability Group at the Spanish National Cancer Research Centre (CNIO), has just received the European Research Council (ERC) Proof of Concept Grant to develop his TARGETSET research project. His team will get a 150,000-euros financial contribution to study the preclinical efficacy of a drug that could be used to treat some childhood tumours associated with a poor prognosis for 18 months.

The ERC Proof of Concept Grants are made available to researchers who have already received an ERC grant for a frontier research project and now want to explore the commercial or societal potential of their work. In 2014, Fernández-Capetillo was awarded an ERC Consolidator Grant to study the relation between ageing, cancer and replication stress, a source of DNA damage that arises every time a cell replicates its DNA. The ERC-funded study led to the identification of ATR inhibitors, that is, drugs that inhibit the activity of a protein that reduces replication stress. Preclinical studies showed their efficacy in a type of acute myeloid leukaemia and Ewing sarcoma. These inhibitors were licensed to a pharmaceutical firm for clinical development, and currently there are several companies carrying out clinical trials to test ATR inhibitors to treat cancer.

Meanwhile, Fernández-Capetillo’s team continued exploring other paths. While studying compounds that reduced the expression of another protein involved in replication stress, the team found that these compounds actually blocked SETD8, a protein that creates DNA modifications that do not change the DNA sequence but regulate gene activity. These modifications are known as epigenetic changes.

Epigenetic research focuses on DNA changes that do not occur during replication but as a consequence of external agents that modify the genome. “One of the big surprises in the field of cancer research,” Fernández-Capetillo says, “was that a large part of the mutations that promote cancer are epimutations. However, few inhibitors of these type of mutations have already been approved for clinical use there has not been much progress in the development of SETD8 inhibitors yet.”

A possible treatment for childhood tumours with a poor prognosis

The finding by the team at CNIO is important: as they were working on early SETD8 inhibitors, other research teams described the role of the SETD8 protein in two childhood tumours associated with a poor prognosis – neuroblastoma (a very rare type of malignant tumour that develops from nerve cells) and medulloblastoma (the most common type of cancerous brain tumour in children) –, pointing at the need to improve the inhibitors available at that time.

“This is what we will do with the funds from by the ERC Proof of Concept Grant. We will try and improve the properties of these inhibitors and study their anti-tumour potential in mouse models,” Fernández-Capetillo explains. “Moreover, we will try to identify the specific mutations that provide sensitivity to the treatment – an important part of the drug development process, necessary to identify which patients can benefit from this type of treatment. Our team has broad experience in this field, especially in the development of ATR inhibitors.”

Importantly, the efficacy of cancer treatments largely depends on certain mutations that patients may carry or not, rather than on the type of the targeted tumour. Finding the mutations that provide sensitivity to SETD8 inhibitors will help identify precisely the patients that might benefit the most from this type of treatment. If these mutations are singled out, progress can be made in the identification of other types of cancer for which these drugs could be used.

TARGETSET was one of the 55 projects selected by the ERC out of 172 applications from all over Europe (six proposals were from Spanish applicants). The ERC Proof of Concept Grant awarded to Óscar Fernández-Capetillo adds to the three ERC Advanced Grants received by Maria Blasco, Marisol Soengas and Mariano Barbacid, the three ERC Consolidator Grants that went to Manuel Valiente, Felipe Cortés and Eva González, and the ERC Starting Grant awarded to Alejo Efeyan. They all highlight the excellence and the innovation potential of the research projects conducted at the CNIO.

Óscar Fernández-Capetillo obtained his PhD in Biochemistry from the University of the Basque Country working on the role of transcription factors on the development of the immune system. In 2001, he joined the National Cancer Institute, USA, where he started his postgraduate work on cellular response to DNA damage. In 2004, he joined CNIO to lead the Genomic Instability Group, where his work continued to focus on the mechanisms involved in DNA damage repair during replication, and how this understanding can be used to stop cancer cells from growing or to prevent cell ageing. Currently, Fernández-Capetillo is Director of the Molecular Oncology Programme at CNIO and the Centre’s Vice-Director.

Fernández-Capetillo’s achievements, including papers published in the world’s most important scientific journals, have earned him national and international renown. In 2014, Cell included him on the list of the “40 under 40” scientists for his creative ways of addressing cancer research. He is the recipient of the Eppendorf-Nature Award for Young European Investigators, the Swiss Bridge Award, the Carmen y Severo Ochoa Award and the Princess of Girona Award. In addition, he is a member of the European Molecular Biology Organization (EMBO).