The $225,000 prize will be used for the in-depth study of prostate cancer and its genetic and molecular signatures and focuses on the generation of new treatments

Olmos is the first Spanish scientist and one of a select number of European researchers to receive this prestigious award, which is normally awarded to Canadian and US scientists.

The $225,000 prize is earmarked for the Research Unit led by Olmos at the CNIO and that was set up in 2012 with the support of the CRIS Foundation for Cancer Research and the Spanish Association Against Cancer (AECC). The project’s objective will be to study the biological mechanisms associated with DNA repair, errors in which could lead to more aggressive forms of prostate cancer.

Olmos states that he feels “privileged as a researcher who, at an early stage of his career, has been able to make a significant contribution to our understanding of prostate cancer,” and he highlighted the fact that “previous winners of this award are now world leaders in the field.”

Since he joined the CNIO after having worked at the Institute for Cancer Research (ICR) and The Royal Marsden NHS Foundation Trust, London, he and with his team have made important contributions to the field of cancer research; for example, his 2013 description of the first hereditary factor with a prognostic role in prostate cancer.

“From these analyses we have identified hereditary alterations in the BRCA1 and BRCA2 genes, which lead to far more aggressive forms of prostate cancer. These or similar alterations could spontaneously occur in other patients and be responsible for aggressive tumour behaviour, even after early diagnosis,” warned the CNIO researcher.

“We are currently working with several national and international centres to study samples from hundreds of patients — something that will allow us to distinguish between tumours that behave aggressively and those that don’t,” he added.

Once the genetic markers that allow an estimate to be made of the degree of aggressiveness of prostate cancer have been identified, Olmos will begin working on a generation of new preclinical models that will hasten the development of more effective treatments.

At the same time, his unit at the CNIO is participating in and coordinating several clinical trials in collaboration with other oncology centres in Spain, Europe, the US, Canada and Australia, in order to develop new treatments designed around genetic markers for tumour aggressiveness.

Olmos also added that over the next few years “we will study, together with other renowned international centres, treatments that are especially directed towards the repair of damage and errors in the DNA’s genetic code — as in the case of PARP protein inhibitors.”

LIQUID BIOPSIES FOR THE STUDY OF TUMOURS

Another of the milestones achieved by the CNIO researcher was the 2012 development of a detection technique for aggressive prostate tumours based on simple blood tests. Now, his team is working on the validation of this practice via a large?scale study of up to 300 patients from 30 centres around Spain.

“Our aim is to be able to detect aggressive prostate cancers using a fast, simple blood test,” said Olmos. 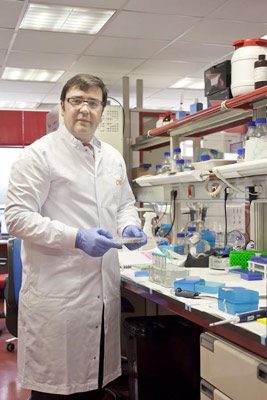 Prostate cancer is the second-most frequent type of cancer in males worldwide, and the first in developed countries. This is true for Spain, where more than 25,000 new cases are diagnosed each year and it is third?highest cause of cancer deaths in men.

Over the past few decades, there has been an increase in the incidence of prostate cancer, but this can be put down to the widespread use of the PSA blood test and the increasing life expectancy of patients, some of whom live with their tumour for several years without symptoms. In other cases, however, the tumour can be highly aggressive and lethal. This heterogeneity highlights the need to develop reliable tests that differentiate between the different types of tumours and allow for the stratification of patients for improved diagnosis and treatment.

Identification of the biological mechanisms that foster prostate cancer aggressiveness may doubly benefit patients: firstly, in terms of the precise individualisation of prognosis and the selection of the most adequate form of treatment; and, secondly, the development of new treatment strategies and therapeutic targets.

About the ‘Prostate Cancer Foundation’

For more than a decade, the Prostate Cancer Foundation’s (PCF) committee of international experts has singled out for recognition the most promising young researchers under the age of 40 who work on innovative projects in the field of prostate cancer.

The PCF is the world’s leading philanthropic organisation dedicated to the funding and acceleration of prostate cancer research. Established in 1993, the foundation has generated more than $577 million, funding more than 2,000 programmes at more than 200 research centres in 18 countries.

The PCF works towards a greater awareness of prostate cancer and a more efficient investment of government research funds in support of translational cancer research. Their efforts have helped produce a twenty- fold increase in government funding for prostate cancer.

More information about PCF can be found at ‘Prostate Cancer Foundation’.