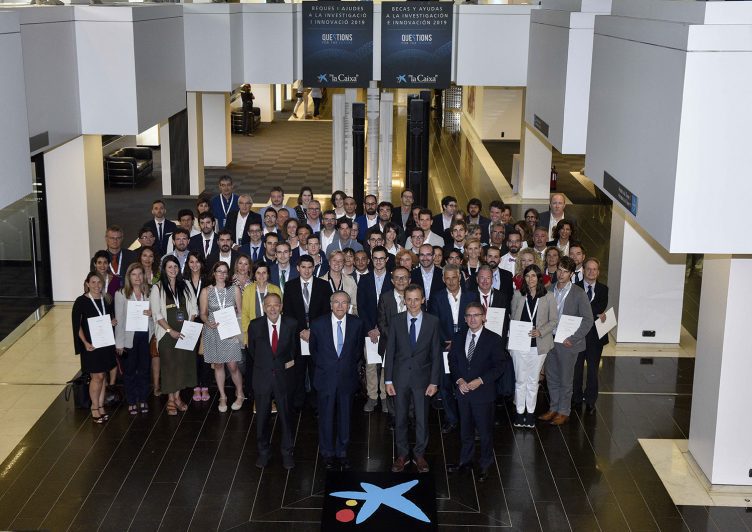 Héctor Peinado, Head of the CNIO Microenvironment and Metastasis Group, will participate in an international project led by VHIO to search for new biomarkers of metastasis in pancreatic cancer

Maria Salazar, a researcher in the Cell Division and Cancer Group led by Marcos Malumbres, has also received a prestigious CaixaImpulse grant to lead a project on regenerative medicine in diabetes

A project led by Maria Blasco, Head of the Telomeres and Telomerase Group at the Spanish National Cancer Research Centre (CNIO), has been selected by “la Caixa” Foundation as part of a funding programme entitled “Questions for the future”, which seeks to encourage outstanding research in biomedicine and health in order to improve the welfare of society. Blasco has been awarded 500.000 euros to identify new therapeutic targets that prevent cancer cells from dividing immortally.

Through this same round of funding, Héctor Peinado, Head of the CNIO Microenvironment and Metastasis Group, has been awarded 262,000 euros for a collaborative project led by the Vall d’Hebron Cancer Research Institute (VHIO), which also involves the Champalimaud Foundation (Portugal), to examine the role played in the metastasis of pancreatic cancer by micropeptides – small proteins whose function is still largely unknown – secreted in exosomes – extracellular vesicles shed by tumours.

The projects have been chosen from among more than 600 submitted to the call launched by “la Caixa” Foundation to promote outstanding research in biomedicine and health. Glioblastoma and pancreatic cancer have one of the highest mortality rates of all tumour types, so finding new therapeutic targets is of the utmost concern to the research community.

In addition, María Salazar, a researcher in the Cell Division and Cancer Group led by Marcos Malumbres, has also received a prestigious CaixaImpulse grant to lead a project on regenerative medicine in diabetes.

During the award ceremony for the funding, held on Monday 16, Isidro Fainé, President of the “la Caixa” Foundation, stated that “scientists are able to transform the world through their imagination, talent and effort, and they get to provide answers to questions that we might not have formulated yet. Here at the “la Caixa” Foundation we promote projects that help broaden the horizons of our knowledge, such as the 79 research projects we are presenting today, which will surely help us to create a hopeful future.”

The project led by Maria Blasco will continue to build on her pioneering studies on the role of the shelterins in glioblastoma, tumours of the nervous system that currently have few therapeutic options and a high mortality rate.

Shelterins are the proteins that protect the chromosome ends or telomeres. Telomeres shorten with each cell division contributing to ageing of the organism and to age-related pathologies. In turn, telomere maintenance is key for cancer cells as they need to proliferate indefinitely.  Maria Blasco’s group has pioneered the idea that targeting telomeres may contribute to new treatments that block this indefinite division.

Blasco’s team has already previously demonstrated that the elimination of shelterin TRF1 blocks the initiation and progression of lung cancer and glioblastoma in mouse models. The researchers have also discovered that eliminating TRF1 prevents glioblastoma stem cells from forming secondary tumours.

“Now, we are seeking to understand the role of mutations in shelterins present in glioblastoma tumours, and generate new mouse models to study how they are regulated in vivo,”, explains Blasco. “In addition, we will continue to study the behaviour of telomeres in tumour cells. The main objective will be to discover their exact role in cancer, to try and identify new therapeutic targets directed against telomeres.”

The project in which Héctor Peinado is participating is an international collaboration led by María Abad, a researcher at VHIO, and which also involves Bruno Costa-Silva, from the Champalimaud Foundation (Portugal). The project will focus on studying the secretion of micropeptides – small proteins whose function is still largely unknown – in exosomes, vesicles shed by tumour cells during metastatic progression. Micropeptides are known to be important in the regulation of processes such as the repair of damaged DNA, the regeneration of tissues and embryonic development, among others. The team will now investigate whether the secretion of micropeptides in exosomes is relevant in pancreatic cancer metastasis. “We will analyse whether micropeptides can be secreted in exosomes and reinforce metastasis, as well as they regulate other intracellular processes. Micropeptide secreted by exosomes may constitute a new mechanism of cell-cell communication during metastasis,” explains Peinado.

The project, developed in collaboration with Abad and Costa-Silva, will examine liquid biopsies of patients with pancreatic cancer to assess whether the micropeptides secreted in exosomes can be used as novel biomarkers of metastasis. The research will also examine whether these small proteins secreted on extracellular vesicles play a role in the formation of pre-metastatic niches in the liver for this type of tumour.

María Salazar, a researcher in the CNIO Cell Division and Cancer Group, has been awarded a CaixaImpulse grant 2019. This programme offers funding of up to 100,000 euros to promote the design and development of innovative projects, in addition to expert support from eminent mentors in the field.

The project led by Salazar proposes a promising strategy to boost regenerative medicine in diabetes. This disease currently has no cure and affects more than 10 million people throughout the world. About a decade ago, cell therapies emerged as a promising alternative to insulin treatment, but they have shown several limitations, and therefore are far from restoring the damaged pancreatic cells in this disease. Salazar presents a strategy based on the use of a tiny molecule – microRNA -, to promote the effective and efficient conversion of stem cells into functional pancreatic cells. These cells would be capable of correcting glucose levels in the blood, which are altered in diabetic patients. The studies conducted by Salazar and her team in recent years (in vitro and in vivo with animal models) are very promising, and, applied to patients, could lead to a revolution in cell therapies targeting this disease.