CNIO participates in the tenth edition of the European Researchers’ Night 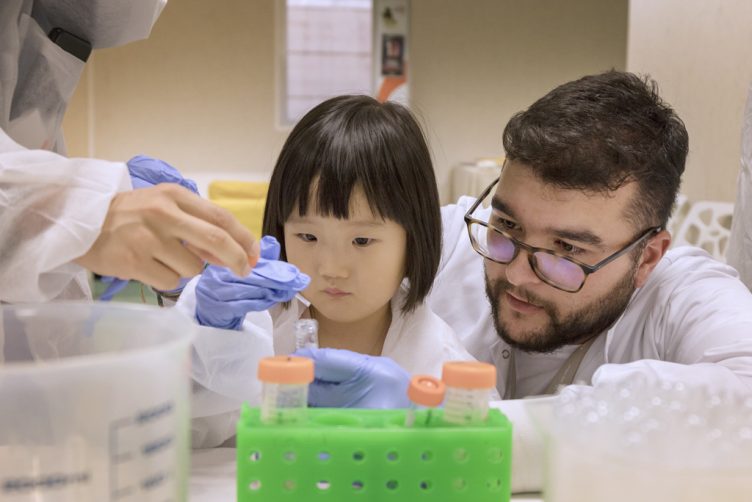 A moment during the European Researchers Night, 2019. /CNIO

Madrid joins 370 other European cities to participate in this initiative that seeks to foster new scientific vocations and demonstrate the reality of researchers, which is very unlike their stereotypical image

Tomato! Salt! Pineapple juice! Bacteria! Cells! These are some of the cries that we will hear from the little ones on September 27, during the tenth edition of Researchers’ Night. The Spanish National Cancer Research Centre (CNIO) will bring this Friday cancer researchers and the general public together to celebrate this special night, with the aims of fostering new scientific vocations among the youngest and breaking stereotypes associated with scientists, to show that they are normal people who have an exciting job.

Under the slogan ‘Meet the scientists, become a scientist!‘, attendees will have the experience of doing an experiment with everyday products such as tomatoes, salt, pineapple juice, and dishwasher soap, with which they will learn to extract DNA. They will also have the opportunity to know first-hand how a research centre of excellence such as CNIO is organised, and to chat directly with scientists in a relaxed atmosphere to find out why they chose to dedicate themselves to science and what their day-to-day life looks like.

As many as 371 European cities will celebrate this Night simultaneously throughout the continent. In the Community of Madrid, CNIO and 23 other institutions will use this night for raising public awareness of the importance of scientific research. As Jorge Martínez Torrecuadrada of the Crystallography and Protein Engineering Unit and coordinator of the event at the CNIO says, “I think it is especially important to popularise science among people who are still going to school and who are the future of our country, so that they will not have the same misconceptions about science as our current and past generations.”

The interest that this event arouses among the public and scientists can be seen in each edition by the speed with which the visitor capacity is reached – this year, full capacity was reached in half an hour – and the number of researchers who offered to receive participants: this time, more than 40 volunteers will bring science closer to the public through scientific culture, as this is one of the qualities that are in the CNIO’s DNA.

This event also falls within the dissemination strategy of the Centre through the Dean’s Office, together with the Office of Institutional Image and Outreach Activities, and the Women in Science (WISE) Office.

In the Community of Madrid, the European Researchers’ Night is promoted by the Regional Ministry of Education, Youth and Sports and coordinated by the Madri+d Foundation. The Project received funding from the European Union’s Horizon 2020 Research and Innovation Programme under the Marie Sklodowska-Curie actions.