Llorca will bring one of the greatest revolutions in protein structure studies to the CNIO; Cryo-electron microscopy uses direct electron detectors, which make it possible to view, at almost atomic resolution, the biological processes involved in cancer or other diseases.

This decision by the CNIO will entail the implementation of a scanning electron microscope equipped with a direct electron detector with the highest scan speed installed in Spain, capable of capturing more than 300 images per second.

The arrival of Llorca and the new instrumentation will serve to enhance our understanding of the molecular bases of cancer and contribute to the development of new therapies.

In addition to this new recruitment, we have the group led by Ivan Plaza-Menacho, which recently incorporated to the CNIO, and Rafael Fernández Leiro, who will join in September

The CNIO is, thus, strengthening its structural biology programme to turn it into an international benchmark in cancer research. 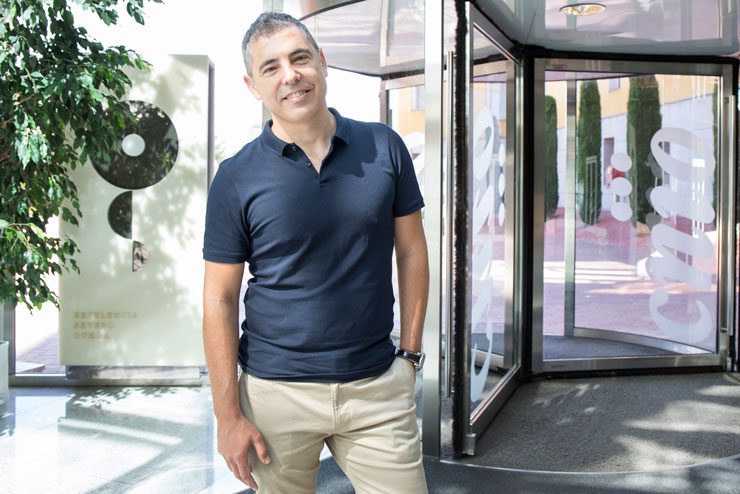 How can you visualise the molecules involved in the development and progression of cancer at the atomic level? The researcher Óscar Llorca will be working on this issue – science fiction until a few years ago – at the Spanish National Cancer Research Centre (CNIO), which he has joined to direct and enhance the Structural Biology Programme. The researcher will cooperate closely with other Programmes at the Centre to apply revolutionary molecular visualisation techniques and, thus, contribute to the development of new therapies against cancer.

This decision by the CNIO also comes with the addition of two new research groups to the programme directed by Llorca: Iván Plaza-Menacho’s group, which recently joined the CNIO to study kinase type proteins involved in cancer, and Rafael Fernández Leiro’s group, which will conduct research on genome integrity.

Llorca, with nearly 100 scientific papers in his name, some of which have been published in prestigious journals, such as Nature or Nature Structural & Molecular Biology, is a leading figure in the field of Structural Biology. Throughout his professional career, he has managed to visualise the structure of more than 40 macromolecular structures that are essential for life, such as DNA repair proteins or components of innate immunity.

One of the features of cancer cells is their genomic instability, which causes alterations in their genetic material and that tumour cells use to grow and spread through the body. This chaos is exacerbated by defects in the DNA repair processes, whose signalling pathways are also altered in cancer.

Llorca’s work at the CNIO will primarily focus on the study of the structural and functional aspects of these biological processes, paying particular attention to PIKK proteins – a family of protein kinases involved in the complex cellular response to DNA damage –and associated molecules, such as chaperone Hsp90– which are essential for the correct functioning of the PIKK proteins.

In the words of the researcher, “there are now several compounds that exploit defects in these signalling pathways and in the response to DNA damage in the cancer cells, which are in various development stages as well as clinical trials in patients. Studies of the molecular and structural mechanisms of these pathways are subject of great academic interest, and could also be used as a basis for designing novel therapeutic approaches,” and, he adds: “The development of PARP1 inhibitors to treat patients with BRCA gene mutations is a good example.”

The scientist will also explore, in collaboration with other CNIO groups, the structural biology of other processes, such as DNA replication or telomere maintenance during cell division. The stimulating scientific environment at the CNIO will encourage synergies between the Structural Biology Programme and other CNIO groups to tackle the challenge of understanding the mechanisms of cancer from a multidisciplinary perspective.

“Oscar Llorca is one of the leading structural biologists in our country, and I am sure that he will put the CNIO on the map as the best structural biology centre in the world. We are delighted that he has joined our Centre to lead one of its most ambitious research programmes, one that has great potential to influence the development of new targets against cancer,” says Maria A. Blasco, CNIO Director.

With the arrival of Llorca, the CNIO will incorporate one of the most advanced technologies used to study the architecture and organisation of proteins: cryo-electron microscopy (cryo-EM). “We have known about this technology for more than 30 years, but it is over the last four years that it has resulted in a revolution thanks to the emergence of direct electron detectors that allow us to visualise biological processes at atomic scales like never before,” says the researcher.

All of this is exponentially increasing the use of cryo-EM: in 2015 more than 180 structures were deposited in the Electron Microscopy Data Bank. “This technological revolution represents a paradigm shift in the way complex cellular processes are studied. We can now view them at the molecular level, and that is going to redefine concepts and mechanisms on how cells function”.

Thanks to this project, the CNIO is joining other national and international institutions that are also acquiring these new technologies and advanced equipment. The CNIO instrumentation will include a direct electron detector capable of capturing up to 300 high-resolution images per second, a piece of equipment that is unique in Spain and that places the centre’s capability in the field of structural biology at the forefront. These capabilities will be specially adapted to determining the structure of small macromolecular complexes, which are the most relevant to the understanding of the molecular mechanisms of cancer.

Óscar Llorca (Tudela, Navarre 1968) obtained his PHD in Molecular Biology at the Autonomous University of Madrid. After his postdoctoral stay at the Institute of Cancer Research in London, he joined the Centre for Biological Research of the Spanish National Research Council (CIB-CSIC) to direct his own research group. His nearly 100 scientific papers have accumulated almost 3,400 mentions. He has been the vice-director of the CIB-CSIC, he has been member of European Research Council (ERC) evaluation committees, and a member of the External Scientific Committee of the Biophysics Unit at the CSIC/University of the Basque Country. Óscar Llorca is manager of the Molecular and Cellular Biology Research Projects Programme of the Ministry of Economy, Industry and Competitiveness, and has received important awards, such as the “Francisco Cobos to Biomedical Research” prize or the “Bruker-Spanish Biophysical Society” award.