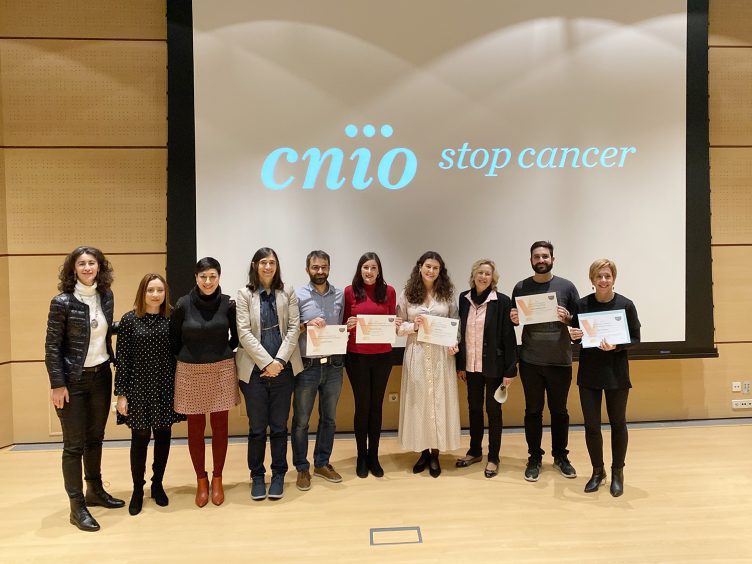 Winners of the Awards for excellence in research of predoctoral students and postdoctoral researchers, and the Award for the most outstanding contribution in outreach to society, with Maria Blasco, Marisol Soengas, Isabel López de Silanes and members of the Rosae Association. /CNIO

As every year, the Spanish National Cancer Research Centre (CNIO) reviews the work done during the past 12 months by its youngest researchers. On December 11 and 12, Lab Day put pre- and postdoctoral researchers in the spotlight to present the progress of their studies, celebrate the successes of 2019, and share views on the different directions a scientific career can take. The event was organised by the Dean’s Office together with the organisations of pre- and postdoctoral students of the CNIO.

Because of the large number of entries received, Lab Day was split for the first time into two different days to accommodate all the latest news. Thus, on the 11th the poster exhibition was held, with 55 papers presented, and on the 12th the invited talks and 15 oral presentations were given and the awards ceremony took place.

On the 12th, the conference started with the oral presentations, in which the scientific significance of the papers presented and the ability of the authors to summarise this significance in just 7 minutes were evaluated. The most outstanding initiatives of the CNIO & the City outreach project in 2019 were also announced, and a last-year student at the secondary school Las Musas in Madrid explained the research project on cytogenetics that she carried out at her school, after a stay at the Innovation Department and after learning about the work of the Molecular Cytogenetics Unit led by Sandra Rodríguez.

As part of the invited talks, we were visited by Laura Soucek of the Vall d’Hebron Institute of Oncology, who talked about how to move from basic research to create a start-up; Gerardo Barcia, a BBVA Next Technologies consultant, who gave researchers new approaches to leadership and team-building; and Diego Marqueta, who explained how to prepare effective scientific presentations that have an impact on the audience.

During the Day, Awards for excellence in research of predoctoral students were presented to:

The Award for Excellence for postdoctoral or senior researchers was awarded to Ángel Rivera Calzada, of the Macromolecular Complexes in DNA Damage Response Group, for a study carried out together with the University of Würzburg in which the team solved the 3D structure of the nanomachine that makes tuberculosis virulent (Nature).

María Jesús Alcamí, Administrative Assistant to Scientific Director, received the Award for the most outstanding contribution in outreach to society from the hands of Mª Luisa Villafranca of the Rosae Association (also members of CNIO Friends), for her selfless dedication over the years to outreach and training activities, especially highlighting her contributions within the Women in Science Office (WISE).

In addition, Sonia Corral-Leal and Mónica Pérez, from the Epithelial Carcinogenesis Group, won the illustration award and explain the meaning of their ‘Give us a hand’ design as follows: “Progress in research is not only the responsibility of the scientists and governments that provide the funds, but of everyone: society can also take an active position, physicians – reaching consensus about promoting a unified sample collection -, patients  -participating in epidemiological studies – and their families – promoting the role of foundations – but also the general public, participating in charity projects and supporting the foundations financially, through volunteering, or simply by disseminating.”

The conference ended with the announcement of the winners of the oral and poster presentations. Ignacio Gallardo, director of the Jesús Serra Foundation that supports these prizes, presented the awards.

Maria Blasco, CNIO Director, who explained the main scientific and institutional milestones of the Centre in 2019, said “I congratulate all the winners for the magnificent work they have done, that results in the CNIO being a better research centre every day. I also thank everyone involved in the Lab Day, who contribute to its success, year after year. The meeting demonstrates that it is the collaborative spirit that makes a science that we build together advance.”

Marisol Soengas, Head of the Melanoma Group and Head of the Dean’s Office of the CNIO, explains that “Lab Day is a very special event for the CNIO. It is aimed at young scientists and scientists in training, who are the ones who are doing the hard work, researching to advance the understanding, diagnosis, and treatment of different types of cancer. I love their joy and pride when they are presenting their work in talks or posters. It creates a real team spirit.” This indispensable Christmas event, which was supported by the Jesús Serra Foundation, Hoffmann Eitle, IDT, Promega, ThermoFisher Scientific, Miltenyi Biotec, PerkinElmer, and Macrogen Spain, gathers new forces to boost the advances that the excellent scientific community of the CNIO will continue to provide throughout 2020 in cancer research.