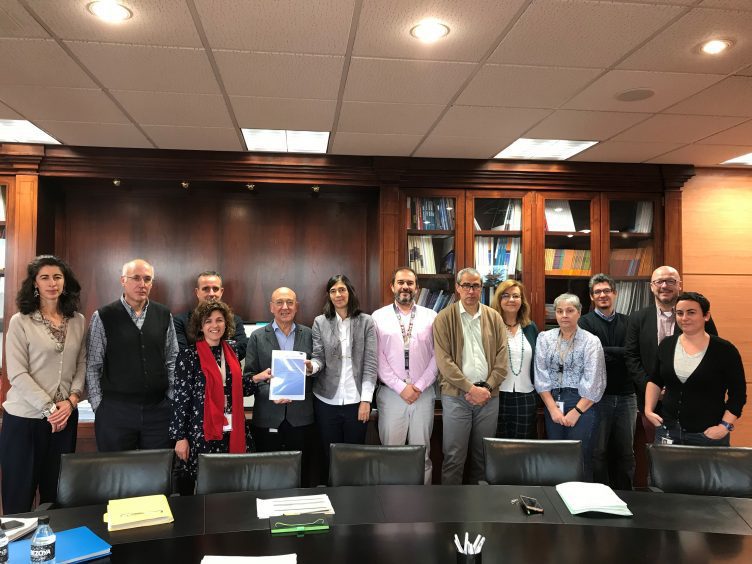 Signing of the CNIO Equality Plan, with Maria Blasco, Scientific Director; Juan Arroyo, Managing Director; Ana Isabel Hernández, Chairwoman of the CNIO Works Council; Miguel Amaya, Deputy Secretary of Fetico; Isabel López de Silanes, Coordinator of the Women in Science Office at CNIO; and other representatives of the Works Council and the Board of Directors. /CNIO

On November 6, the Spanish National Cancer Research Centre (CNIO) adopted an ambitious Equality Plan setting forth significant measures in hiring and recruiting practices, training programmes, work/family conciliation, work promotion, gender pay gap and gender-based violence. The Equality Plan reflects CNIO’s commitment to the principle of equality and non-discrimination based on birth, race, gender, opinions and beliefs, class or social background, or any other personal circumstance. It is also the result of the joint work and the negotiations between the Board of Directors, and the Works Council representing workers.

The CNIO Equality Plan includes 67 specific, quantifiable measures, in an effort to make a significant contribution to improving working conditions, optimising its professionals’ capabilities and raising their quality of life. Therefore, this is expected to have a positive impact on research results.

Most measures (55%) are of direct implementation. For instance, establishing a 50% gender quota for female scientists, ensuring gender balance in work promotion and making working hours more flexible for victims of gender-based violence. 20% of these measures improve existing legislation on family/work conciliation: co-responsibility (share caregiving tasks), substitutions for parental leave, leave of absence in case of international child adoption, strategic meetings held no later than 4pm, and so on. Others require medium- or long-term action to be taken over the next four years: the right to digital disconnect and teleworking (both currently under negotiation), non-sexist hiring protocols, recategorising job positions, designing training plans and preventing workplace harassment.

The Equality Plan will make available gender-sensitive statistical information through staff surveys and other tools. This information will be used for measure assessment and follow-up.

“Today is an exciting day at CNIO,” Director Maria Blasco said after the adoption of the Equality Plan. “We have taken a significant step towards gender equality. We have worked closely with the Works Council and the Women in Science Office at CNIO to produce one of the most ambitious equality plans I have ever seen,” she added.

Isabel López de Silanes, Coordinator of the Women in Science Office (WISE) at CNIO, remarked that “although CNIO had long been committed to gender equality and equal opportunity, as shown by the Women in Science Office, established in 2012, and a long series of measures aimed at the promotion of equality and family/work conciliation among CNIO workers, the Equality Plan strengthens this commitment and garners institutional support for it. The CNIO Equality Plan will enable us to pursue equal opportunity in more definite and effective ways, becoming the starting point for new measures that help us achieve real equality between women and men.”

Representatives of the CNIO Works Council have declared their commitment to “get gender equality and equal opportunity for women and men, contributing to the building of an egalitarian society where people are treated equally and have equal opportunities, with no limits to the development of their skills and the making of decisions. We believe this Equality Plan will be an effective working tool to make gender equality real at CNIO.”