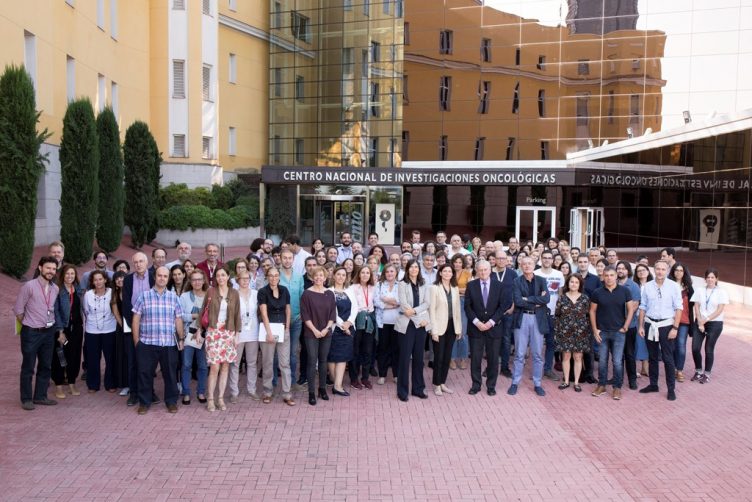 The research areas of the Spanish National Cancer Research Centre (CNIO) and the Spanish National Center for Cardiovascular Research (CNIC) -cancer and cardiovascular disease, respectively- have many molecular mechanisms in common. For that reason, scientists from the two institutes collaborate in quite a few studies. Moreover, both institutes have similar and complementary technology platforms. In order to further share knowledge and promote synergies and future collaborations, the two of excellence affiliated to the National Institute of Health Carlos III (ISCIII) organised today a CNIO-CNIC Joint Meeting that took place at CNIO headquarters.

Raquel Yotti, Director of the ISCIII, opened the meeting, and Maria Blasco and Valentín Fuster, Directors of CNIO and CNIC, respectively, presented an overview of some of the most innovative research lines of each of their institutions and underscored the vital importance of collaborative research.

“This is a very important initiative, not only because of the outstanding quality of the scientific program of this meeting but also because it represents a genuine effort to share knowledge across disciplines and build bridges between two of the most important research centers in Spain and Europe,” says Raquel Yotti. “This type of multidisciplinary and collaborative environment can inspire a creative interaction, which can lead to new questions and, finally, to new solutions.”

“CNIO and CNIC work to advance the treatment of diseases that in many cases have a common origin,” says Maria Blasco. “It is therefore essential to collaborate and share knowledge among our institutions.”

For his part, Valentín Fuster states that “this meeting reflects the philosophy that the CNIC has followed since its foundation, which is based on collaborative research with research centers of excellence, such as CNIO, and is focused on translation and benefit to the patient.”

The latest CNIO milestones include the incorporation of three new group leaders to strengthen its basic and translational Molecular Oncology and Structural Biology programs and, more specifically, its research in the areas of metastasis and DNA repair. Felipe Cortés, who leads the Topology and DNA Breaks Group, Eva González, Head of the Transformation and Metastasis Group, and Solip Park, who is setting up her Computational Cancer Genomics Group, bringing to CNIO innovative approaches and new technologies which might help in the advance to clinical applications.

Another milestone mentioned by Blasco is the philanthropic platform CNIO Friends, which gives society the opportunity to collaborate directly with cancer research. Thanks to its more than 1,300 donors, nearly two million euros have been raised since 2014. Among others, this generous support has made it possible to launch the International Postdoctoral Contract Program ‘CNIO Friends’, aimed at hiring young talent to promote new lines of cancer research. To date, 11 scientists have been contracted to carry out projects on among other metastasis, childhood cancer, and kidney and liver cancer.

The CNIO is a Spanish public institution dedicated to the research, diagnosis and treatment of cancer, and affiliated to the Carlos III Institute of Health (Ministry of Science, Innovation and Universities). It is one of the 10 leading cancer research centers in the world (Scimago Institutions Rankings World Report; Nature Index) and covers the entire R&D and Innovation spectrum, from basic research to the clinic, with a view to transferring the results quickly and efficiently to the National Health System and to the pharmaceutical and biotechnology market.

The CNIO has an Experimental Therapeutics Program that covers the initial stages of the development of drugs directed against the therapeutic targets its scientists are working on. Some of the CNIO’s compounds have been licensed to international pharmaceutical companies. In addition, the CNIO is actively involved in “open innovation” programs of international pharmaceutical companies, which has resulted in an influx of more than 25 million euros into the CNIO in the past 6 years. Finally, three spin-off companies have emerged from the CNIO, which have also allowed patients to benefit from the center’s developments. These data reflect the Institution’s commitment to innovation and technology transfer and illustrate the importance of public-private collaboration for the advancement in the diagnosis and treatment of disease.

About the CNIC The mission of the Spanish National Center for Cardiovascular Research, directed by Dr. Valentín Fuster, is to promote cardiovascular research and to translate it to the patient.  This activity has led to the CNIC being recognized as one of the ‘Severo Ochoa Centers of Excellence’. The center is funded by means of a pioneering public-private collaboration between the government, through the Carlos III Institute of Health, and the Pro CNIC Foundation, which is a group of 12 major Spanish companies.