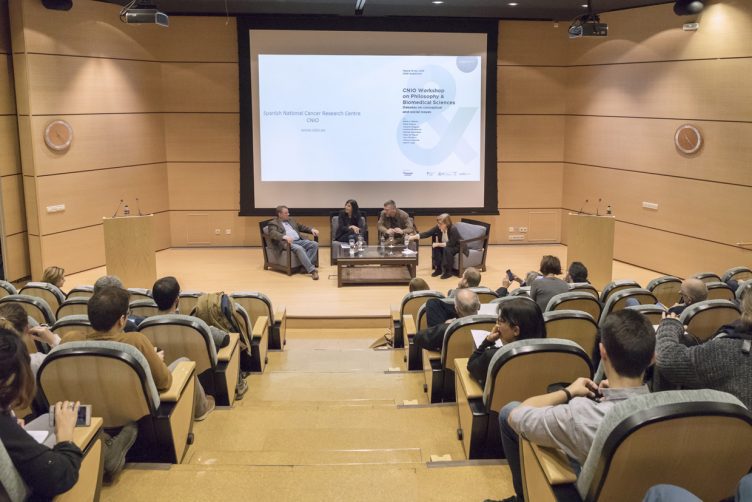 Debates at the 'CNIO Workshop on Philosophy & Biomedical Sciences: Debates on conceptual and social issues'. /CNIO

A picture of the future in which people live for more than a hundred years in good health, the worst diseases are avoided by gene editing in embryos, and organs for transplantation are grown in organ farms, is not unrealistic. Many scientists are working today to make that happen. But will that future lead to a brave new world Huxley style? What if science were disfiguring human nature? Should limits be put on what we investigate, and can that be done? For the first time, philosophers and biologists reflected together on the social impact of the life sciences at the Spanish National Cancer Research Centre (CNIO), in a workshop open to the public on 19 November.

The organisers of this workshop met a few months ago at an exhibition about death; they talked and talked, and the hours passed too quickly. Maria Blasco, CNIO Director and creator of the first gene therapy that prolongs life in mammals -mice-; Antonio Diéguez, Full Professor of Logic and Philosophy of Science at the University of Malaga and author of the book Transhumanismo. La búsqueda tecnológica del mejoramiento humano [Transhumanism. The technological search for human enhancement];and Arantza Etxeberria, Professor of Philosophy of Science at the University of the Basque Country, sought an opportunity to continue their spontaneous discussion and to enrich it with more experts.

The result was this workshop, entitled CNIO Workshop on Philosophy & Biomedical Sciences: Debates on conceptual and social issues, with the support of the Banc Sabadell Foundation and aimed to bring philosophy closer to the practice of science and to encourage philosophical work in these areas.

From transhumanism to personalised medicine

The meeting has been organised in three sessions on topics that illustrate the social impact of current molecular biology: longevity, human enhancement and transhumanism, personalised medicine, and gene editing.

Aging, enhancement, and human nature at the age of transhumanism was the title of the first debate, participated by Maria Blasco, Antonio Diéguez and Michael Hauskeller, Head of the Department of Philosophy at the University of Liverpool (United Kingdom). Altough aging and death have been important aspects of our self-understanding as humans, transhumanist or posthumanist perspectives present now challenging alternatives around enhancement that need to be discussed both from a philosophical and scientific perspective.

The second session was participated by Arantza Exteberria, Henrik Vogt, physician and philosopher at the Centre for Medical Ethics at the University of Oslo (Norwegian), and Alfonso Valencia, Director of the Spanish National Institute of Bioinformatics and the Life Sciences Department at the Barcelona Supercomputing Centre (BSC). With the title Extended heredity, systems medicine, and personalised medicine, the experts questioned the impact of non-genetic factors on heredity and how contemporary biomedicine includes them in conceptual and practical senses. Systems medicine and personalised medicine are part of this topic, as, e.g., discussions on how the latest needs to be carried by current biomedical sciences should address both technological and humanistic views.

The meeting closed with a debate on The impact of CRISPR-Cas editing in biology and society. Lluis Montoliú, Director of the Departament of Molecular and Cellular Biology at the National Centre for Biotechnology (CNB-CSIC), María Cerezo, Professor of Logic and Philosophy of Science at the University of Murcia, and Íñigo de Miguel, Research Professor at the Chair in Law and the Human Genome of the University of the Basque Country, discussed scientific issues, philosophical perspectives and ethical challenges of this novel high precision editing technology, that have opened up avenues to the development of new therapies against diseases such as cancer.

For Antonio Diéguez, co-organiser, a central question is whether among the range of possibilities opened up by the new techniques there is one that threatens human dignity. “When talking about modifying the germline, for example, opponents often use three arguments: that it violates human dignity; that one should not play God; and that it is intrinsically bad,” says. “None of them convince me. If one modifies the genome in an embryo to avoid disease, why does that imply loss of dignity?”

Diéguez does consider it a challenge that social inequalities may appear that will be difficult to overcome -at least more difficult than today- because they will be “etched” into the genetics of each individual.

During her participation at the session on personalised medicine and non-genetic heredity, co-organiser Arantza Etxeberria discussed how science addresses the relationship between organism and environment. In her opinion, “research in genetics is often very much focused on the biological makeup of people, but neglects the importance of relational aspects, both with the environment in general and with other organisms.”

In the experience of the another co-organiser of this Workshop, Maria Blasco, scientists always consider the ethical part of their work: “I would never investigate anything that did not make me feel that I am doing something positive and intrinsically good. We do research to improve things. I don’t know anyone who does research to make things worse. There are always limits because science is there for the advancement of humanity, not for its decline or for doing unethical things.”