Home | News | CNIO News | Classicist and Princess of Asturias Laureate Mary Beard, warns of the effects that the pandemic could have on the labour gains achieved by women, during International Women’s Day event organised by the CNIO, IE University, and the British Embassy

Classicist and Princess of Asturias Laureate Mary Beard, warns of the effects that the pandemic could have on the labour gains achieved by women, during International Women’s Day event organised by the CNIO, IE University, and the British Embassy 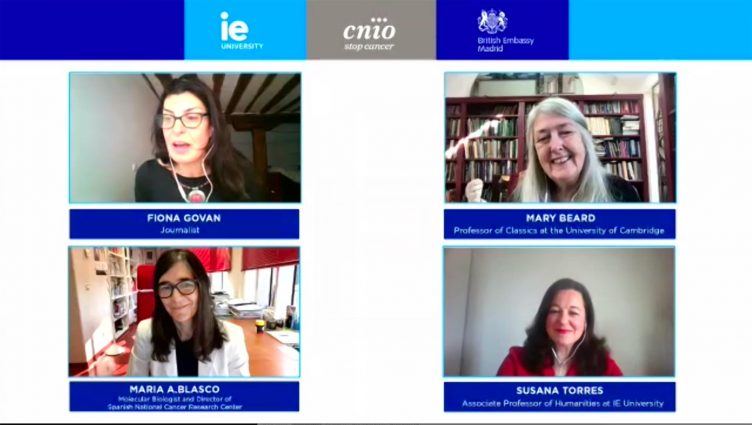 Professor of Classics at the University of Cambridge and Princess of Asturias Laureate Mary Beard participated in the event, along with molecular biologist and Director of the Spanish National Cancer Research Centre (CNIO), Maria Blasco, and IE University Professor Susana Torres, presented by journalist Fiona Govan

During the colloquium "Women in Power", which took place by zoom, these three leaders highlighted that, despite the progress made in the incorporation of women in different social spheres, there is still a long way to go to achieve real equality, and outlined the challenges that remain

On the occasion of International Women’s Day, the Spanish National Cancer Research Centre (CNIO), IE University and the British Embassy organised a colloquium discussion featuring three great leaders in their fields: Mary Beard, Professor of Classics at the University of Cambridge and Princess of Asturias Laureate; Maria Blasco, molecular biologist and Director of the Spanish National Cancer Research Centre (CNIO); and Susana Torres, Professor of Humanities at IE University. The discussion was moderated by journalist Fiona Govan. All speakers called on social organisations to make a greater commitment to help women occupy positions of responsibility in all areas. The event was opened by the UK Minister for Science, Amanda Salloway, and the British Ambassador to Spain, Hugh Elliott.

During the opening remarks, the British Minister for Science, Research and Innovation, Amanda Salloway, said “that over the past year, it has been brilliant to see scientists from the UK and Spain spearheading global action to tackle COVID-19 and, in particular, the role that women have played in this international response. Of course, there is more to be done and the UK government continues to push the agenda for more women in R&D,” she added.

“The presence of women in power is key”, said British Ambassador Hugh Elliott. Where women have little or no voice, societies do not perform well. There is much that governments can do to help, which is why the FCDO and the British Embassy see women’s political empowerment, participation and leadership as a central part of our mission”. The debate revolved around the false conciliation during COVID, the differences between Spain and the UK on equality issues, the perpetuation of non-conciliatory models in culture, science and academia.

There was wide agreement that although it gender equality has progressed, there is still a long way to go to before real equality is achieved, since the positions of power, which are also those with the greatest visibility and economic power, are not yet equally occupied by men and women.

During the “Women in Power” colloquium, which took place by zoom with approximately 400 people from 21 countries, these three leaders highlighted the importance of education in the context of families and in social spheres as one of the keys to breaking those gender stereotypes that still negatively affect girls and women.

Mary Beard pointed out that “this is a wonderful opportunity for women to discuss where we are at across national boundaries and to share experiences. There are a lot of achievements to celebrate on International Women’s Day, but there is also a recognition that there is a lot more to be done. One big question, of course, is that the effect of the pandemic will be in the medium term. Will it liberate our patterns of work, or push women back to the home”.

Maria Blasco recalled that she created the Women in Science Office (WISE) in 2012, shortly after becoming director of the CNIO, “to combat gender stereotypes that prevent women from reaching positions of responsibility”. “Because, although we women are the majority at the lowest and intermediate levels of the research career, our presence is still very much in the minority in management positions,” the scientist stressed. “There are many studies that point out the reasons why this happens, and it is our duty to take measures to ensure that there is more gender equity. To this end, at the CNIO we have made important structural changes, including the implementation of a flexible working day, the subsidization of childcare, teleworking, inviting 50% women to seminars and conferences organized by the CNIO, etc.”, concluded Blasco.

For her part, Susana Torres, Professor of Humanities at IE University, defended that “it’s about time we create new cultural paradigms that are true to the intelligence, endurance, resolution and unmatchable resilience of women everywhere”. “It is a reality that we have gone out to conquer the public space, now we need to rearrange the private one and achieve a real conciliation”, demanded Susana Torres.