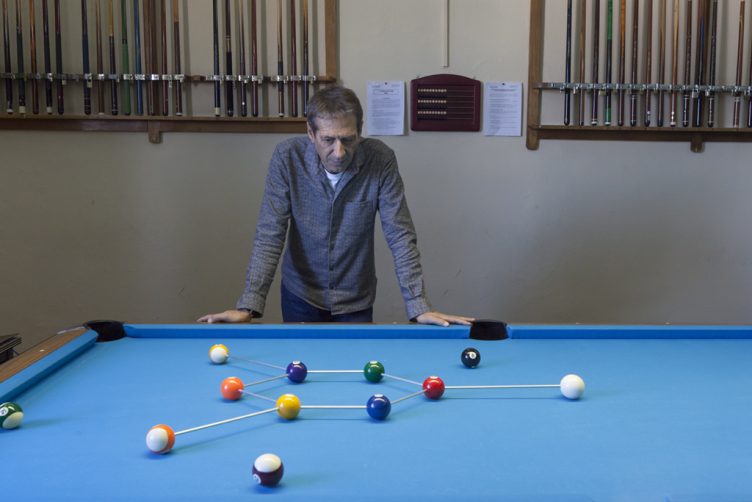 Second edition of CNIO Arte, a project developed by CNIO with the support of Fundación Banco Santander

The work will be exhibited at CNIO from 19 February to 12 April. It will also be presented at the ARCOmadrid and JUSTMAD art fairs

"At CNIO we want to build bridges between science and art, and that is why we invite great artists to reflect on the work of great scientists," says Maria A. Blasco, CNIO Director

All the money collected from the sale of Madoz’s work will be used to support cancer research at CNIO, through the ‘CNIO Friends’ philanthropic initiative

The physicist Ignacio Cirac and the photographer Chema Madoz met last year in a room at the Spanish National Cancer Research Centre (CNIO) and decided to collaborate. Cirac is one of the world’s most internationally renowned scientists in the field of quantum information; Madoz is known as a craftsman, a builder of visual poetry. What did they talk about at that meeting? They might want to reveal it on February 19, at 11am in the CNIO Auditorium, at the presentation of the result of their collaboration: a photograph by Madoz inspired by the science of Cirac. The encounter between Cirac and Madoz is part of the CNIO Arte programme, an initiative developed by CNIO with the support of Fundación Banco Santander to bring together internationally renowned scientists and artists. This is the second edition of CNIO Arte, and has been curated by the visual artist Amparo Garrido. In addition to Ignacio Cirac and Chema Madoz, the launch event at CNIO will be attended by the art critic Carlos Jiménez; director of Fundación Banco Santander, Borja Baselga; and Maria A. Blasco, CNIO Director. As explained by Blasco, “both science and art illuminate the mind, but on few occasions, is science the subject of art. I am convinced that this is not because artists find science uninteresting; perhaps it is simply that artists and scientists need to come together and share their ideas. At CNIO we want to build bridges between science and art, and that is why we invite great artists to reflect on the work of great scientists.” Since the early 1990s, Chema Madoz has been photographing ideas embodied in objects that he designs and builds, in which irony, humour, or quite simply beauty are conceptually highly charged. In his work, surprise is a trigger that activates within the viewer new ways of looking at reality. Among other accolades, Madoz has received the National Photography Award (2000). He is the first living Spanish photographer to whom the Reina Sofia Museum has dedicated a retrospective exhibition. His work also has broad international repercussions. Ignacio Cirac is one of the most influential international physicists in the field of quantum information. In 1995, aged just 30, together with his colleague Peter Zoller, he published a paper that for the first time explained how a quantum computer could be built – a goal pursued today by researchers around the world, backed by major corporations. Cirac is Director of the Max-Planck Institute for Quantum Optics in Garching, Germany, which he joined in 2001. His accolades include the Blas Cabrera National Research Award; the Frontiers of Knowledge Award; the Prince of Asturias Prize; the Wolf Award; and the Max Planck Medal, among others. The piece that Chema Madoz has created for CNIO consists of 30 photo engravings, numbered and signed, which may be purchased through the Trinta Gallery, the Elvira Gonzalez Gallery and the CNIO web page. All the money collected from the sale will be used to support cancer research at CNIO, through the CNIO Friends philanthropic initiative. The work will be exhibited at CNIO from February 19 to April 12. In addition, coinciding with the season of contemporary art fairs, it will also be presented at ARCOmadrid on 1 March at 6pm (Pavilion 7, Presentations Room), and at the JUSTMAD art fair, where, between February 26 and March 3, the project will be explained at a stand that will exhibit one of Madoz’s photo engravings and a portrait of Cirac. CNIO Arte was first launched in 2018 with a piece by visual artist Eva Lootz, created after her meetings with molecular biologist Margarita Salas. Besides the funds from the Fundación Banco Santander, the project has the support of the Spanish Foundation for Science and Technology – Ministry of Science, Innovation and Universities, through CNIO & The City.