Home | News | CNIO News | Carl Djerassi: “Science is based on human values such as trust”

Carl Djerassi: “Science is based on human values such as trust”

The chemical, recognised worldwide as being one of the fathers of the contraceptive pill, gave a talk titled Science on the Page and Stage as part of the Distinguished Seminars series cycle, organised by CNIO and sponsored by the Banco Sabadell Foundation

Carl Djerassi, who is recognised worldwide as being one of the fathers of the contraceptive pill, visited the Spanish National Cancer Research Centre (CNIO) last Friday, June 10, to give a talk titled Science on the Page and Stage. This talk is part of the Distinguished Seminars series cycle, organised by CNIO and sponsored by the Banco Sabadell Foundation.

During his speech, Djerassi highlighted the humanisation of science as a source of progress. “Trust plays a critical role in understanding the advancement of science, even more than for other disciplines, such as art or literature”, he said.

At the end of his talk, the researcher and humanist stressed competitiveness as an intrinsic and dynamic vehicle for scientific activity.

Besides researcher and science communicator, Djerassi is the author of several literary works framed in genres as diverse as poetry, drama or narrative. Among other titles, he is the author of Cantor’s Dilemma. Attendees received Djerassi’s books as a welcome gift.

During this transition period between science and art, Djerassi also participates actively as patron for young artists.

His research experience has earned him many prizes and awards, amongst them the Wolf Prize in Chemistry and the Priestly Medal, the highest honour awarded by the American Chemical Society.

He is currently Professor Emeritus at Stanford University and mainly engaged in writing. 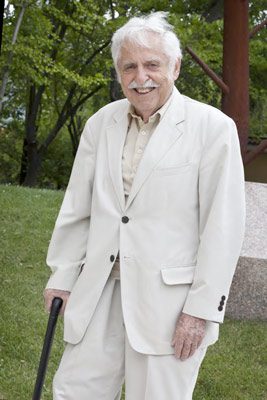 Carl Djerassi before his talk at the CNIO campus. /CNIO