Home | News | CNIO News | Bioinformaticians, physicists and mathematicians join oncologists to uncover the heterogeneity of cancer with Big Data and personalise its treatment

Bioinformaticians, physicists and mathematicians join oncologists to uncover the heterogeneity of cancer with Big Data and personalise its treatment 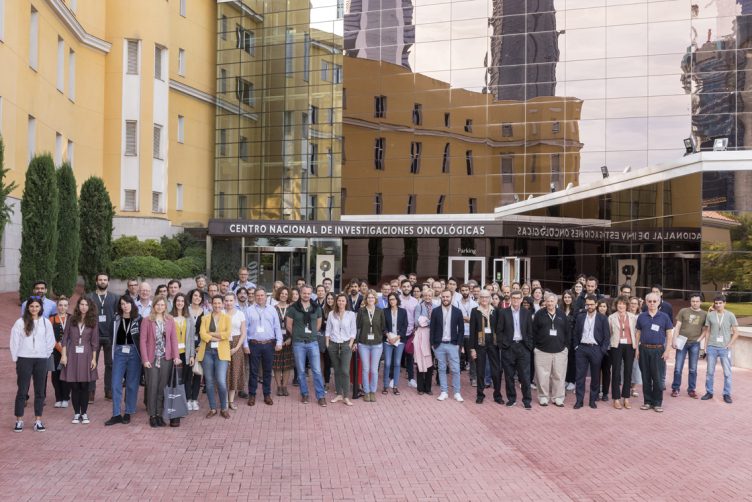 From 23 to 25 September, experts from around the world discuss at the international Congress CNIO-“la Caixa” Frontiers Meeting how the analysis of the currently available vast amounts of data on each type of cancer will help to expand the scope of immunotherapy and prevent phenomena such as metastasis and resistance to therapies

“The study of cancer with computational techniques is exploding,” explains Fátima Al-Shahrour, Head of the Bioinformatics Unit of the CNIO and co-organizer of this CFM. “It is the way to increasingly personalize treatments.”

In addition to Al-Shahrour, the meeting is co-organized by Arnold Levine of the Simons Center for Systems Biology at the Institute for Advanced Studies in Princeton (USA) and discoverer in 1979 of the p53 ‘tumor suppressor’ gene; Solip Park, head of the CNIO Computational Cancer Genomics Group; and Raúl Rabadán, director of the Program for Mathematical Genomics at Columbia University (USA)

Big Data has burst into cancer research. Technical advances that generate massive amounts of data, such as the ability to analyze the genome of each of the thousands of cells in a single sample, have made mathematicians, computer experts and even particle physicists now work in oncology. Their work is revealing a greater complexity of cancer than expected and is proving to be indispensable for achieving more personalized and effective treatments. At the upcoming CNIO Frontiers Meeting (CFM), from September 23 to 25 at the Spanish National Cancer Research Centre (CNIO), the most significant results in this area will be analyzed.

“The study of cancer with computational techniques is exploding,” explains Fátima Al-Shahrour, co-organizer of the meeting and Head of the Bioinformatics Unit at the CNIO. “We now have a previously unthinkable amount of information on each tumour; analysis of this information with new computational methods can give us the answer to why a tumour becomes resistant, generates metastases, or is cured with immunotherapy in some patients but not in others. In that way, we are moving towards an increasingly personalized medicine.”

The CNIO-La Caixa Foundation Frontiers Meetings are prestigious international meetings on hot topics in cancer research. They have been held since 2010. The present CFM, entitled Heterogeneity and Evolution in Cancer, brings together more than 130 cancer experts and computational, physical and mathematical biologists from the world’s most active groups in the area.

One of the most impactful recent techniques is the sequencing of individual cells. Traditional sequencing methods provide information on the average genome in a sample containing millions of cells, but each cell has its own DNA, and the ability to analyze this in each cell separately revealed that each tumor is a heterogeneous group of cell populations that evolve differently.

This finding has ramifications. As Raúl Rabadán, Director of the Program for Mathematical Genomics at Columbia University (USA) and co-organizer of this CFM explains, “tumours are genomically much more complex than anticipated; they can have thousands of mutations that differ from one patient to another, and even different cells within a tumour can contain different mutations. This heterogeneity leads to very different therapeutic responses in different patients.”

Single-cell sequencing equipment can analyze the genomes of more than 10,000 cells. The resulting information, together with that provided by many other genomic techniques, is the raw material from which new computational methods extract knowledge about the mechanisms of tumor progression and the response of individual patients to different therapies. Thus, cancer research is entering an era in which interaction with other disciplines, such as computer science, physics, engineering, and mathematics, is needed.

Solip Park, an expert in systems biology who heads the CNIO’s Computational Cancer Genomics Group and is a co-organizer of the CFM, points out that in cancer research “it is not sufficient to study a single gene or factor, you must also analyze its interactions with other genes, and how it is affected by the environment.” This systems biology approach is already making valuable contributions to oncology, such as large genomic databases on the genetic diversity of patients and the response to drugs. “These approaches already serve as a guide in the clinic,” adds Park.

Why immunotherapy only works for some

One of the questions that arouse most interest among oncologists and patients is why immunotherapy works well in some patients, but not in others. For the organizers of this CFM, part of the answer lies in “the extra level of complexity” that entails characterizing not only tumour cells but also cells of the immune system and how they interact with each other, explains Al-Shahrour.

To address the problem, medical doctors are needed who talk to patients and collect samples, immunologists who characterize the interaction between cells, and statisticians, mathematicians and computer scientists who integrate all this information. For Arnold Levine, of the Simons Center for Systems Biology at the Institute for Advanced Study in Princeton (USA), it is also a priority to expand the effectiveness of immunotherapy. And he adds other challenges, such as the emergence of resistance: if a therapy kills most of the tumour cells, those that survive due to their genetic diversity could cause a relapse.

“After it became possible to sequence the DNA from many tumors and even from one tumour at various times in its development, it became clear that cancers contained many mutations, no two cancers were identical and cancers evolved with cell division and treatments,” says Levine. “The ability to change, the relatively high mutation rates, permit resistance to treatment. Combination therapy using multiple drugs and activating the immune system to recognize cancer antigens and kill these cells may well provide the approach to overcome resistance to treatment”.