Alejandro Sanz endorses the agreement between Juegaterapia and ‘CNIO Friends’ 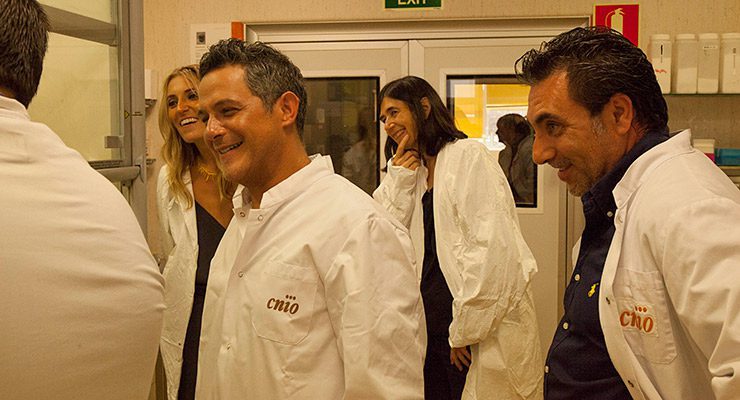 After six years working with children suffering from cancer, the Juegaterapia Foundation is now opening a new line of work: 'Juegaterapia Research'

The singer accompanied the Foundation as its Goodwill Ambassador

The Juegaterapia Foundation, which helps children suffering from cancer, has signed a collaboration agreement with the CNIO Friends initiative to fund a grant worth 100,000 euros that will be dedicated to research projects related to childhood cancer over a period of two years. The singer, Alejandro Sanz, accompanied the Juegaterapia Foundation as its Goodwill Ambassador during a visit to the CNIO.

Juegaterapia and CNIO Friends are joining forces to provide an opportunity for young researchers to develop projects of excellence that will lead to progress in the fight against paediatric cancer. In the next few days, the CNIO will announce the call for applications in order to select the best candidate who, for two years, will be working at one of the leading cancer research centres in the world.

The funding for this project comes from the sale of the Baby Pelones toys by the Juegaterapia Foundation. Alejandro Sanz, who has designed one of the scarves worn by the dolls, has come to the CNIO as Juegaterapia´s Goodwill Ambassador to sponsor this agreement. The singer visited the facilities and obtained first-hand information on the research being carried out. “The fight against cancer is a war and I am a soldier”, he said during his visit to the CNIO.

Maria A. Blasco stressed the significance of this handshake. “Philanthropy is still lacking in Spain and this agreement between the Centre and Juegaterapia is a further step to promote it”.

On the other hand, Mónica Esteban, President and Founder of Juegaterapia, was very satisfied with this new phase the foundation is introducing because “over the years we have had the luck to help many children through the game, but we felt that we should expand our work into the field of research”.

The CNIO Friends initiative arose in late 2014 with the purpose of raising funds to finance various research projects developed at the Spanish National Cancer Research Centre and, thus, persevere in our efforts to improve the diagnosis and treatment of cancer. To date, we have more than 600 donors whose generosity has allowed the introduction of three post-doctoral fellowships to study this disease.

The Juegaterapia Foundation helps children suffering from cancer through game therapy. It collects game consoles that people no longer use and distributes them in childhood cancer wards in all Spanish hospitals so that young patients can play during their chemo cycles and take their minds off their illness.