One of the most important things we have been able to do with the CNIO Friends initiative, thanks to your support, is to create an international contracts programme to bring scientific talent to the CNIO to which researchers from all over the world present themselves every year to carry out a cancer project with us.

Our program is a clear demonstration that collaborating directly with cancer research pays off. To date, 13 scientists have been incorporated, and this year we offer seven additional positions, the largest number called to date. All this, thanks to your generosity and commitment to collaborate with us through your solidarity.

Over the years, institutions and foundations have collaborated directly and very actively with the program, some funding full scholarships such as Juegaterapia, and others such as L’Oréal Spain, Exterior Plus or Asisa Vida have joined us in partnership to support the programme. In 2020 the Humanism and Science Foundation made a gift of 100,000 euros over two years to fund a full scholarship to promote the development of preclinical models for the study of cancer. We also received a gift of 100,000 euros from a private foundation, to support a full post-doctoral contract. From here I thank you both for your collaboration and I welcome you.

I also want to take this opportunity to thank on behalf of the Centre all CNIO Friends who have been working during these months on the front line. Especially the healthcare professionals, but also providers of basic commodities, state security forces and local police, pharmacists, firefighters, volunteers, and many more. For the enormous effort made these days, I thank you from my heart. 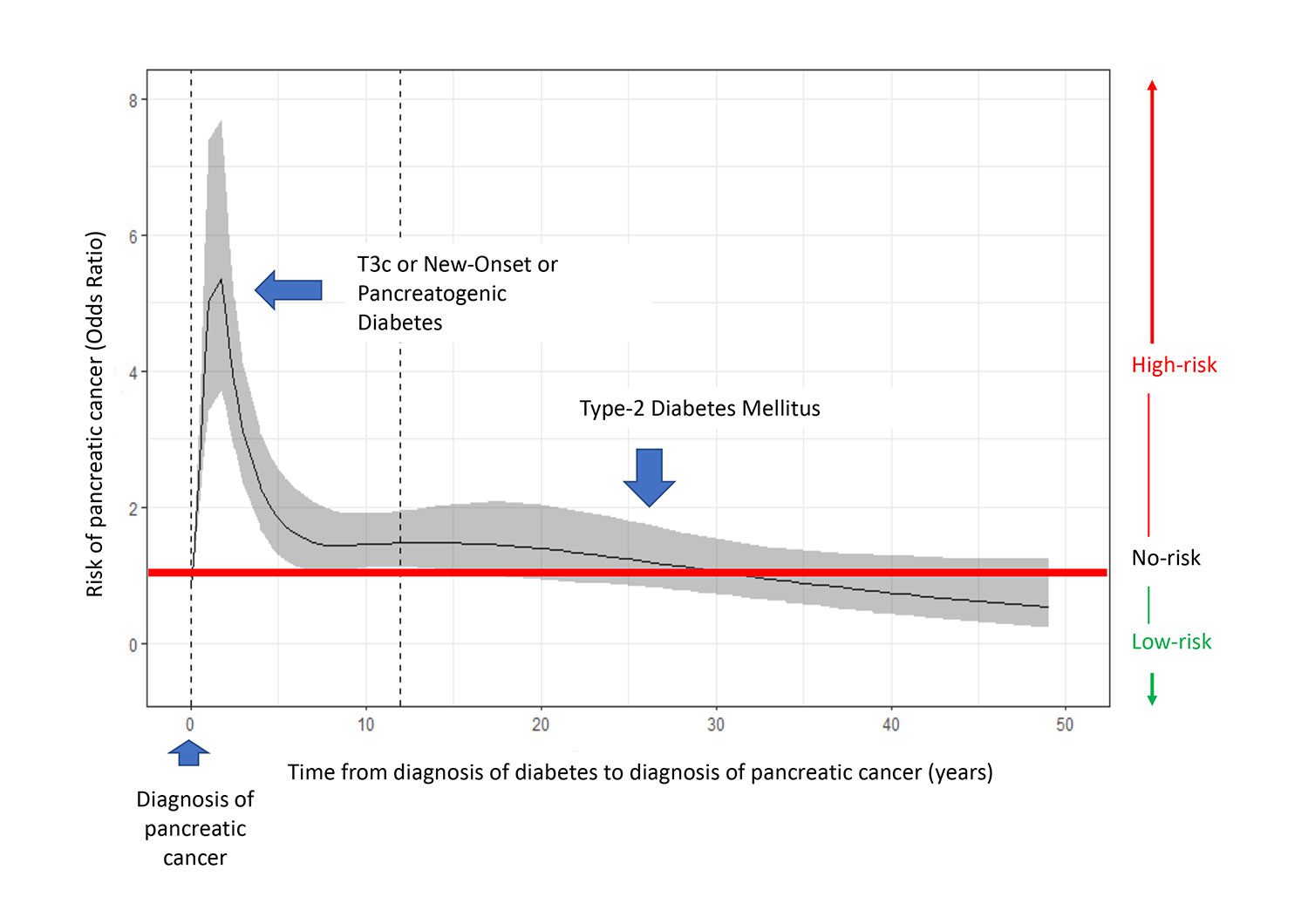 A team led by researcher Núria Malats, Head of the CNIO’s Genetic & Molecular Epidemiology Group, has collected epidemiological data confirming that type 3c – or pancreatogenic – diabetes is an early manifestation of pancreatic cancer.

This cancer has a high mortality rate because it hardly presents any symptoms in its early stages. Therefore, this discovery underscores the importance of distinguishing type 3c from type 2 diabetes, in order to diagnose pancreatic cancer patients earlier and thus improve survival figures.

Thanks to the support of CNIO Friends, we have issued a call for applications for seven new cancer research positions. Thanks to your donations the CNIO’s prestigious CNIO Friends International Contracts Programme has been in place for five years, and this year it is able to offer new scientific talent more positions than ever before to develop cancer research projects.

The call for this contracts programme is highly competitive. To date, 13 researchers have been recruited to carry out projects on metastasis, childhood cancer, kidney and liver cancer, among other lines of research.

Last week we experienced an intimate and moving CNIO Friends Day with our Friends and donors: some of our researchers presented their cancer research projects that they are carrying out thanks to your generosity and, in addition, we had a very special guest: Luz Casal talked with Maria Blasco about philanthropy and the solidarity initiative she conducted during the months of confinement due to the pandemic, in which she spoke to more than 2,000 people by telephone to help them cope with the isolation. You can find all the details of the virtual meeting in the link ‘More information’. For those who were not able to attend live, in the coming weeks we will send you the recording.

We are extremely proud of our fantastic donor community and the researchers we have recruited thanks to your support. Thank you from our hearts! 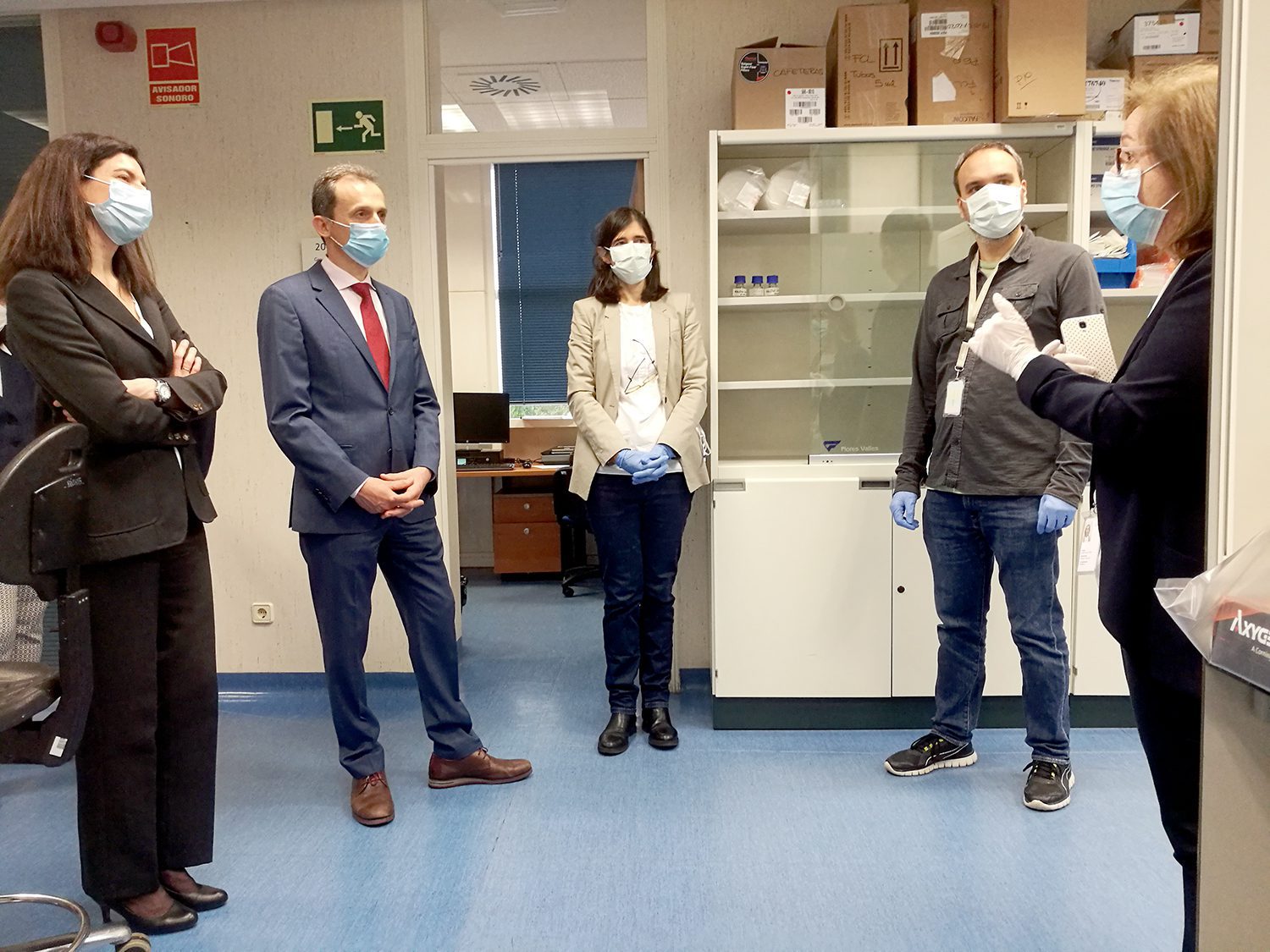 At the beginning of May, the Minister of Science and Innovation Pedro Duque visited the CNIO and our ‘sister’ centre the CNIC, accompanied by Raquel Yotti, Director of the National Institute of Health Carlos III to which the two centres are affiliated.

Duque and Yotti learned first-hand how scientific work has been adapted during the state of alarm and learned in detail about some of the coronavirus-related projects the CNIO is working on. Two of these projects have already been selected to receive funding from the COVID-19 Fund: a strategy to generate a rapid diagnostic kit, which we talked about in the previous newsletter and which has now also received CaixaImpulse funding through the “la Caixa” Foundation, and another project for generating preclinical mouse models to improve the study of the disease and which we will talk about below.

We continue to pitch in with our our people, skills and capabilities in the face of the situation caused by the coronavirus: The Mouse Genomic Editing Core Unit headed by Sagrario Ortega at the CNIO has received funding from the National Institute of Health Carlos III to create humanised mice as preclinical models with which to investigate new drugs against the SARS-CoV-2 virus.

Ortega explained that “we want to put our experience at the service of the scientific community by providing new tools to help accelerate the development of effective therapeutic strategies against COVID-19.”

In addition to these two projects that have received funding from ISCIII and the “La Caixa” Foundation, other CNIO groups also have projects underway addressing COVID-19.

The Telomeres and Telomerase Group, led by Maria Blasco, is investigating whether the length of telomeres (the ends of the chromosomes that determine cell life) is related to COVID-19 mortality for different age groups and, specifically, its possible role in the development of pulmonary fibrosis in patients with pneumonia.

The Genomic Instability Group, led by Óscar Fernández-Capetillo, is using bioinformatics approaches to predict which commonly used medicines could be used to treat cytokine storm, which is one of the leading causes of mortality in COVID-19 patients.

The Familial Cancer Clinical Unit, led by Miguel Urioste, and the Human Genotyping-CEGEN Unit, directed by Anna González Neira, are analysing genetic markers for COVID-19. The goal is to find genetic variants that can identify the people likely to develop the most severe forms of the disease, to focus preventive efforts on them and prioritise their immunisation when a vaccine is available. 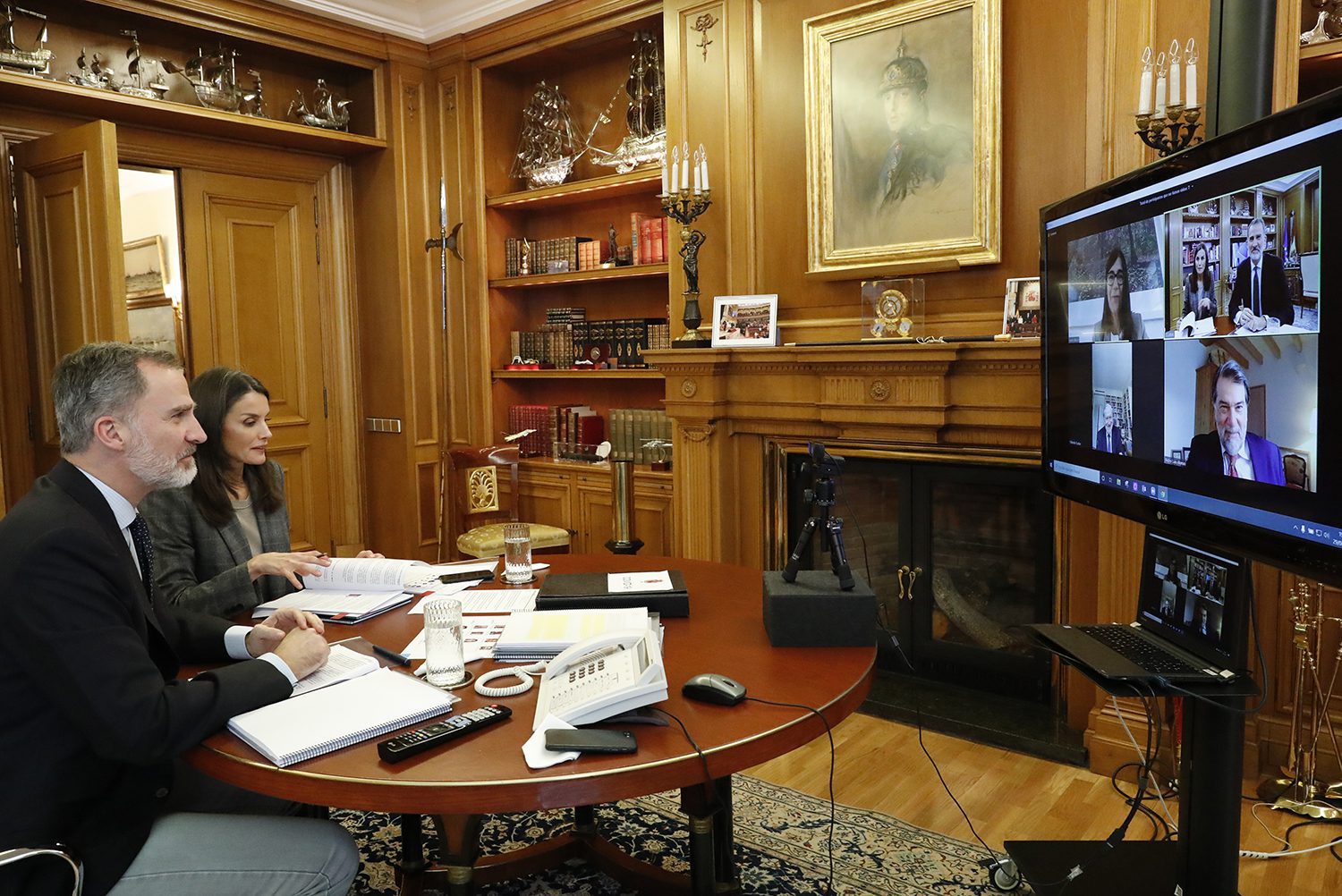 As Honorary Ambassador of the Brand ‘Spain’, Maria Blasco participated in a videoconference with Their Majesties the King and Queen of Spain, together with Valentín Fuster from the CNIC and Pedro Alonso from the WHO, to discuss the way out of the public health crisis generated by COVID-19 and the importance of investing in science and research for future pandemics.

The King and Queen also talked with other personalities from Spanish companies, sports and culture about the impact of the pandemic on their activities and the need to join efforts to overcome it.

A few days later, the King and Queen also held a meeting with eight young talents to learn about their vision of the future; among them was Lucía Zhu, a postdoctoral researcher of our Brain Metastasis Group.

We spoke with Núria Malats about her finding that type 3c diabetes -also called pancreatogenic diabetes- can be an early manifestation of pancreatic cancer.

How did you come to this conclusion?

We knew that diabetes mellitus and pancreatic cancer are related, to the point that more than 40% of patients with this cancer have diabetes. What was not yet clear was their relationship to each other, which of them is the cause and which is the consequence.

Until now, diabetes mellitus was more generally considered to cause cancer, but with my team we showed for the first time that it could also be the other way around, at least for a part of diabetes mellitus patients. Using epidemiological and statistical analysis tools, we verified that type 3c diabetes is caused by pancreatic cancer. This happens in about 20% of these cancer patients.

What consequences does the finding have for patients?

Regarding patients with diabetes, these results show beyond the shadow of a doubt how important it is that they receive the most precise diagnosis possible, distinguishing classic type 2 diabetes from diabetes type 3c. Diabetes type 3c is fairly unknown and in most cases it is incorrectly diagnosed as type 2. But there is an increasing understanding of its differences from the other types regarding its origin, mechanisms and therapeutic approach. The fact that we have now seen that it also has a strong relationship with pancreatic cancer only reinforces the importance of it being correctly identified.

With regard to pancreatic cancer, the knowledge that diabetes 3c may be one of its first manifestations is important for both researchers and clinicians, who need parameters to identify the people who are at the highest risk of developing this cancer. Thus, the primary care physician, gastroenterologist or endocrinologist who diagnoses diabetes in an elderly patient who also has risk factors associated with pancreatic cancer, such as for example obesity, alcohol or tobacco consumption, may think of the possibility that cancer is involved and monitor the patient more closely. But our finding can already be transferred to the National Health Systems as a factor to be taken into account for the early detection of pancreatic cancer.

On the other hand, we also observed that the co-occurrence of classic type 2 diabetes and obesity indicates an altered metabolic state that is associated with an increased risk of pancreatic cancer.

What will be the next steps in this research?

We are interested in exploring the complexity of all these relationships in more detail and studying the molecular mechanisms that link these two diseases. To this end, we have determined numerous markers in our PanGenEU study. This is a large study that we conducted in six European countries. Many patients, families, physicians and researchers have participated in this study and I thank them all for their contributions and support. 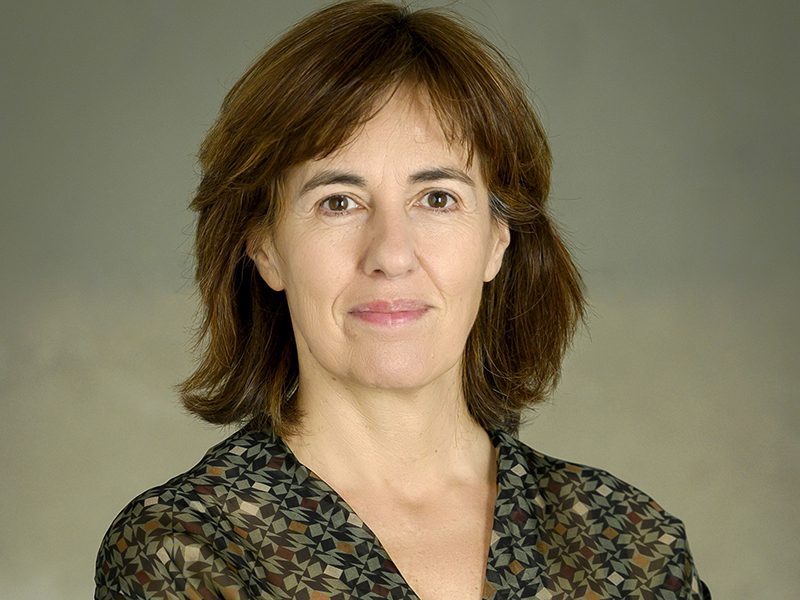 Inés Cobo, curator of the contemporary art collections of the Friends of the Prado Museum Foundation, joined the speakers invited by the CNIO Office for Women in Science (WISE) to give visibility to professional women in all fields.

In her talk entitled ‘The Museo del Prado and the artists’, Inés Cobo vindicated women artists throughout history, broke down stereotypes (such as, for example, the old cliché that women were incapable of producing art with strength and character, traits that were considered the exclusive province of men), spoke of pioneers who revolutionised pictorial genres and explained the path taken towards their visibility.

Cobo has more than 30 years of experience in managing, implementing and developing projects related to the cultural sphere. She joined the Foundation in 1998, first as head of cultural activities and since 2016 as manager and developer of content and educational programs.