Home | News | CNIO celebrated its annual CNIO Friends Day, with the participation of around a hundred donors

CNIO celebrated its annual CNIO Friends Day, with the participation of around a hundred donors 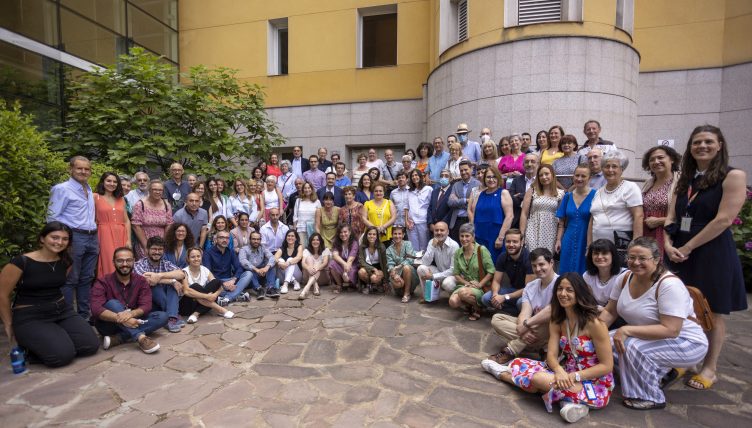 The scientific director of CNIO, Maria A. Blasco, presented the centre’s latest initiatives
Several researchers who have been funded through its International Contracts Programme talked about the projects they are working on
Over the course of this emotional day, the participants showed their interest in learning all about CNIO's research and where cancer research is headed over the coming decades

Yesterday, the National Cancer Research Centre (CNIO) held its annual meeting with Friends of the CNIO, the community of donors that has enabled the centre to launch its International Friends of CNIO Contract Programme to attract research talent and carry out innovative cancer research projects.

At the meeting, which took place in person once again at an open day held at the centre’s headquarters, around one hundred CNIO Friends had the opportunity to learn about some of the cancer research projects being carried out at the CNIO thanks to their generosity.

The participants were welcomed to the day’s events by the director of CNIO’s Philanthropy Office, Jessica Rose. The scientific director of the centre, Maria A. Blasco, then gave a broad review of the latest initiatives developed at the centre, such as the Lottery launched last February to mark International Cancer Day. “Your help affords us greater flexibility when launching initiatives that will help us to advance more quickly in terms of getting results and passing on to society our achievements and the importance of promoting greater support for cancer research at all levels,” she said.

Seven of the post-doctoral researchers currently working at CNIO thanks to this programme presented the progress they are making in their research projects, which cover: the cell division of cancer (Diana Vara); experimental oncology (Federico Virga); growth factors, nutrients, and cancer (Albert Harguindey); chromosomal dynamics (María José Andreu); breast cancer (Ana Maria Roncero); and DNA replication (Sergio Muñoz). Sergio Muñoz, who gave the closing speech, stressed: “In this challenge that is the fight against cancer, we are all part of the solution. It is a great source of pride and also a great responsibility for us to be able to carry out and fulfil your wishes, so rest assured that we will continue to work hard to achieve the best results.”

Later, the CNIO Friends participating in the day’s events took a tour of the centre’s laboratories and facilities, where the heads of different groups and departments explained to them the work that their teams are doing. They were able to visit the Endocrine and Hereditary Cancer group, Microenvironment and Metastasis group, the Experimental Therapies group, the Electron Microscopy Unit, the Cryogenic Room, and the Confocal Microscopy Room.

Thanks to the generosity of CNIO Friends, which includes individual donors, patient associations, companies, and institutions, more than €3 million have already been raised to promote cutting edge cancer research projects.

The event was very relaxed and personal, with some very moving moments. Over the course of the day, the participants showed their interest in learning all about CNIO’s research and where cancer research is headed in the future.

The commitment to CNIO is growing through various sectors of society

The CNIO Friends International Contracts Programme, which is a highly competitive international programme, aims to attract talented young scientists to promote promising new lines of cancer research. So far, 26 scientists have joined the centre on two year contracts to develop projects on metastasis, breast cancer, childhood cancer, renal and liver cancer, among many other research areas. A new edition of the programme will be launched soon for 9 more post-doctoral contracts.

The programme is funded not only through the contributions of small and large donors, but also thanks to the invaluable collaboration of several patient associations such as Rosae, Bandera Rosa, L@s Fuertes, Super Nenas, AEFCC, Marea Rosa Montemolín and Freesia Group, among others.

This is in addition to the support offered by companies and foundations. Between 2020 and 2021, we received generous donations from Fundación Humanismo y Ciencia, a private international foundation, and Fundación Domingo Martinez, which funded three full-time contracts that are still active; in addition to the collaboration of Fundación Franz Weber and Fundación Solidaridad Carrefour Foundation. Other partner companies such as Brother Iberia, Grupo Santa Lucia, Exterior Plus, La Roche-Posay (L’Oréal) and JCDecaux, among others, are also supporting the programme in one way or another each year.

The CNIO Friends initiative was launched in December 2014, in order to meet a growing demand within society reflected, year after year, by reports of public perception of science: interest in patronage and new forms of citizen participation in science and research and, more specifically, in the field of medicine and health. The driving reason behind the philanthropic initiative CNIO Friends was summarised in one sentence by the centre’s scientific director, Maria A. Blasco: “We are increasingly aware that things are also up to us, that each of us is also part of the solution. We can help make the world better by personally participating in it.”

In addition, CNIO promotes other projects, such as CNIO Arte, which has been running for five years now and is organised with the support of Fundación Banco Santander and the British Embassy in Madrid. These initiatives raise money for CNIO and help bridge the gap between science and society through culture.