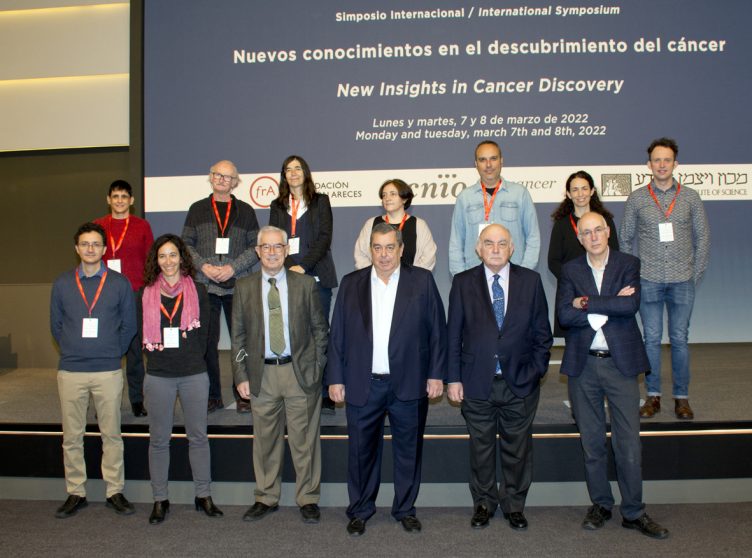 Entitled ‘New Insights in Cancer Discovery 2022’, this is the third congress to be held as a result of the institutional agreement between CNIO, Israel’s Weizmann Institute of Science, and Fundación Ramón Areces
Researchers from two of the world’s leading cancer centres will discuss their advances in understanding the mechanisms that drive or help fight cancer, such as the immune system
Maria A. Blasco, director of CNIO, and Moshe Oren, director of the Moross Integrated Cancer Centre at the Weizmann Institute of Science will open the conference. Oren is one of the researchers who successfully cloned the tumour suppressor gene p53, which is involved in almost 50% of cancer cases when it malfunctions

Two of the world’s leading cancer research centres, Spain’s National Cancer Research Centre (CNIO) and the Weizmann Institute of Science, based in Rehovot, Israel, will hold their third joint congress on 7 and 8 March at the Fundación Ramón Areces headquarters, in Madrid (C/ Vitruvio, 5). Researchers from both institutions will present their latest advances in areas considered key to understanding the mechanisms that drive cancer.

Six Weizmann Institute researchers along with researchers from CNIO will report their findings on issues related to genomic and chromosomal instability and its relationship to cancer; the importance of the tumour microenvironment and interactions between the tumour and its host; the analysis of tumour heterogeneity; the relevance of mutations in tumour suppressors; and the role of the innate immune system in tumour detection.

The congress, entitled Insights in Cancer Discovery 2022, is the third such event to be held thanks to the institutional agreement between CNIO, the Weizmann Institute of Science, and Fundación Ramón Areces. This agreement covers the organisation of a congress every two years intermittently in Spain and Israel. Although the previous one took place in 2019 in Israel, the 2021 edition had to be postponed due to the Covid-19 pandemic.

“There have been extraordinary advances in therapy, diagnosis, and prevention in recent decades, but cancer remains one of the leading causes of death worldwide,” say the organisers. “The only way forward is to support research into the mechanisms underlying cancer initiation and progression, which translate into new approaches to developing effective treatments and diagnostic tools.”

Pioneering research into the ‘guardian of cancer’

Moshe Oren is one of the researchers who successfully cloned the tumour suppressor gene p53, which is involved in almost 50% of cancer cases when it malfunctions. The cloning of p53, in 1983, was the first step in research that ended up revealing that the unmutated p53 is one of the body’s most powerful ‘protective guardians’ against cancer. Most of his career has been focused on understanding how p53 works and exploring strategies for using it in cancer treatment.

Research groups from the Weizmann Institute of Science and CNIO are currently collaborating on joint research projects supported by Fundación Ramón Areces. Núria Malats, head of CNIO’s Genetic and Molecular Epidemiology Group, is studying the microbiome associated with bladder cancer with researcher Ravid Straussman, from the Weizmann Institute of Sciences, in collaboration with Francisco X. Real, head of CNIO’s Epithelial Carcinogenesis Group.

Marisol Soengas, head of the Melanoma Group at CNIO, is working alongside Yardena Samuels, of the Weizmann Institute of Sciences, to explore how melanomas can spread throughout the body from tumours just over a millimetre thick. They are also looking for biomarkers that predict which patients will respond best to immunomodulators used in clinical practice.