Home | News | Basic Research | One mutation or two? Researchers in Spain discover why some genes require one or two hits to promote cancer

Nature Communications. One mutation or two? Researchers in Spain discover why some genes require one or two hits to promote cancer 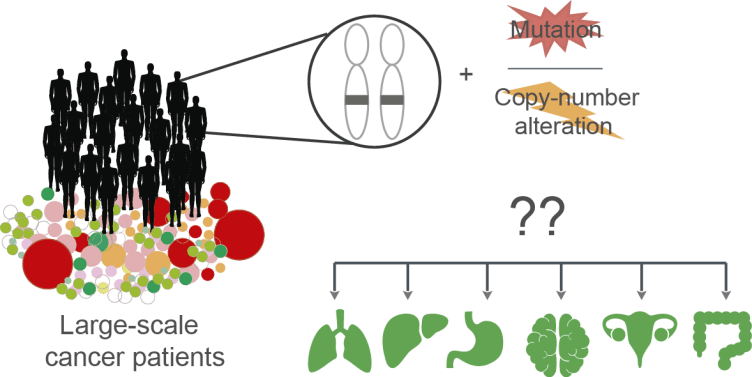 The same genomic alterations affect differently depending on the interaction with other mutations present in different types of cancer. /Solip Park. CNIO

The findings are equivalent to discovering a new 'grammatical rule' in genetic language, one explaining why the same mutation sometimes gives rise to cancer and sometimes does not

The authors analyse the interactions between genetic alterations present in 10,000 human tumors

The language in which the genome’s book of life is written is still being deciphered, which is why it remains a challenge to translate what genes say into physical traits in the organism. For example, why does this or that mutation sometimes cause cancer, and sometimes not? Researchers at the CNIO, the CRG and the IRB Barcelona have just discovered one of the reasons: the power of a mutation depends on its interaction with another, and often even on the relationship between this pair of mutations with a third.

This is the first time that the landscape of third-order interactions has been characterized in cancer.

Their finding is equivalent to revealing one of the grammatical rules of genetic language, a rule saying that −following the metaphor of writing−, the same word (mutation) has different meanings depending on the other words in the sentence, and on the context in which it appears.

As Park states, “this is the first systematic, in-depth, multi-data analysis of the interactions between genetic alterations involved in cancer. There are several works that study a single gene or a single type of cancer, but this is the first large-scale systematic one.”

The research paves the way to deciphering the function of the five hundred or so mutations known to be involved in cancer. If successful, the clinical implications would be significant. Genetic diagnoses would be more precise and new therapeutic targets could be sought, since the best way to counteract a given mutation could be by acting on another.

“So far, research has tended to focus on alterations in a single gene that can be targeted with drugs, but this approach means that associations between different genes involved in cancer must be considered,” explains Park.

Researchers in cancer genetics have known for years that this disease results, in the vast majority of cases, from different genetic alterations acting at the same time. But only now, with big data techniques and great computational power, has it been possible to tackle the challenge of deciphering these interaction networks.

The authors of the paper, computational biologists, turned to The Cancer Genome Atlas (TCGA). They analyzed the interactions between the genetic alterations in 10,000 human tumors of about 30 different types, affecting more than 200 genes.

The hypothesis on how cancer genes are activated is not correct

By analyzing the interactions between genetic alterations, the authors dismantle one of the most widely accepted hypotheses on how genes that promote tumor development are activated. This is the so-called two-hit model.

An oncogene promotes cancer when it is activated, while a tumor suppressor gene acts the other way around; it is its inactivation that drives cancer. “The classic theory,” explains Park, “is that a single mutation in an oncogene can be enough to promote cancer, whereas for a tumor suppressor gene to act, inactivation of both copies of the gene, the father’s and the mother’s, is required. This is the ‘two-hit’ hypothesis. But many exceptions to this classic model are coming to light, and this work finds an explanation.”

Their analysis of the networks of interactions between genetic alterations in 10,000 tumors reveals that many genes involved in cancer, whether oncogenes or tumor suppressor genes, may require one or two hits depending on what other mutations are at work.

Cancer is reached by several pathways

“The correct genetic model for a gene thus depends on the other mutations in the genome,” write Park, Lehner and Supek. “A second hit in the same gene, or an alteration in a different gene in the same pathway, represent alternative evolutionary pathways to cancer.”

In other words, we must not only take into account the effects of individual mutations or pairwise interactions, “but also what happens when three or more alterations are combined,” adds Park.

The researchers postulate that this new grammatical rule of genetic language is universal, i.e., not just involved in cancer. “These principles of genetic architecture are likely to apply to other diseases as well. We believe that systematically analyzing higher-order genetic interactions may also help to understand the molecular mechanisms that cause other human diseases,” highlight the authors.