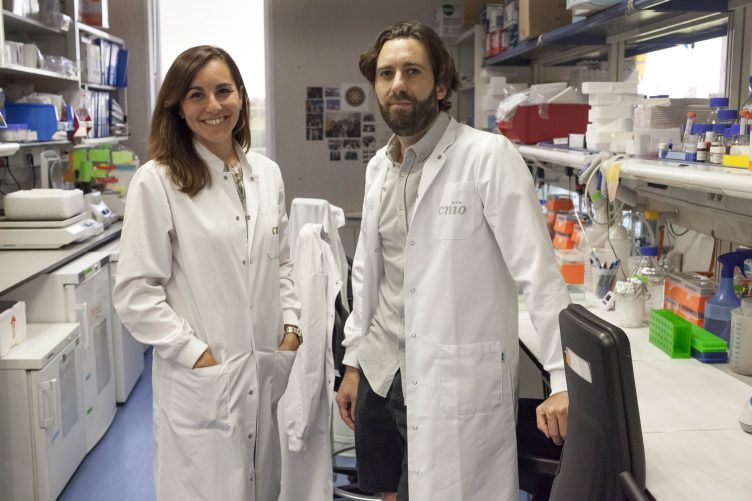 Alejo Efeyan, Head of the CNIO Metabolism and Cell Signalling Group, and Ana Ortega-Molina, first author of the study. /CNIO

For their own benefit and to grow beyond control, tumours manipulate cell signals to make it appear as if the cells have the nutrients they need. That is the case in follicular lymphoma, a type of tumour that affects the B lymphocytes of the immune system. One in six follicular lymphoma patients has mutations in RagC, a gene involved in the mTOR nutrient signalling pathway.

The team led by Alejo Efeyan, head of the Metabolism and Cell Signalling Group at the Spanish National Cancer Research Centre (CNIO), has discovered that genetic inhibition of the RagC protein blocks the activation of B lymphocytes and delays the onset of follicular lymphomas without side effects. The study, which was carried out in animal models, was published this week in the journal Cell Reports.

One of the most common lymphomas

Follicular lymphoma is the second most common type of non-Hodgkin lymphoma. It affects the B cells of the immune system, and its incidence is increasing with 5-7 cases per 100,000 population. It is a cancer with a slow progression, but there is no cure for it: patients eventually stop responding to the few treatments available.

Efeyan’s team had observed that one in six follicular lymphoma patients had mutations in RagC. The RagC protein is part of the large complex of proteins involved in the mTOR pathway, identified decades ago to be essential for metabolic activity and cell growth.

In 2019, Efeyan’s team described in an article published in the prestigious journal Nature Metabolism that mutations in this gene cause these tumours. “We observed that the mutation we introduced into the RagC gene resulted in the gene being permanently in the ‘on’ mode,” Efeyan said, adding: “That study confirmed that mutations in RagC cause the disease and provided the first evidence of the tumour-promoting activity of RagC and of the whole set of genes that inform mTOR of the presence of nutrients for growth.”

In the paper now published by the group, they did just the opposite: they studied a decreased activity of the gene and its effects on the development of follicular lymphomas.

Efeyan and his team reasoned that, if this pathway is important for the growth of these tumours – they become addicted to food through RagC and the mTOR pathway – perhaps inhibiting it would affect their development by removing their metabolic ability to use nutrients at will.

But this system is vitally important to the proper functioning of the body, and RagC cannot be forced to remain constantly in ‘off’ mode, as this is incompatible with life. Instead, the researchers introduced a specific mutation into the RagC gene that partially decreases its activity but does not compromise viability, mimicking the effect that a drug against RagC might have.

“Surprisingly, this decrease in RagC activity in mice caused a significant delay in the progression of follicular lymphomas, which was accompanied by a block in the activation of B lymphocytes,” says Ana Ortega-Molina, first author of the study. “Moreover, this decrease had no harmful side effects or a negative impact on longevity and life expectancy, which has been linked for years to the mTOR pathway. Mice show weights, glucose levels, neuromuscular coordination, skin thickness and liver damage normal for their age.”

These results support “the efficacy and safety of moderate inhibition of this signalling pathway against pathological B cells,” the authors write in the paper. In 2007, not a single protein of this pathway was known, and since then, the search for strategies to modulate these nutrient-mediated signals to combat diseases such as cancer has been unceasing.

Possible implications for the treatment of autoimmune diseases

The findings of the study can also have important implications for other diseases in which B cells are altered, such as autoimmune diseases.

“Now that we know that there is a possible therapeutic window for blocking the RagC pathway, the next step is to develop selective inhibitors that can block these signals in patients,” Efeyan explains.

This work was supported by the Spanish Ministry of Science and Innovation, the Carlos III Health Institute, the European Research Council, the European Regional Development Fund, the Association of Volunteers for Citizenship and Solidarity of the British Council School through the Spanish Association against Cancer, the FERO Foundation and the EMBO Young Investigator Programme.