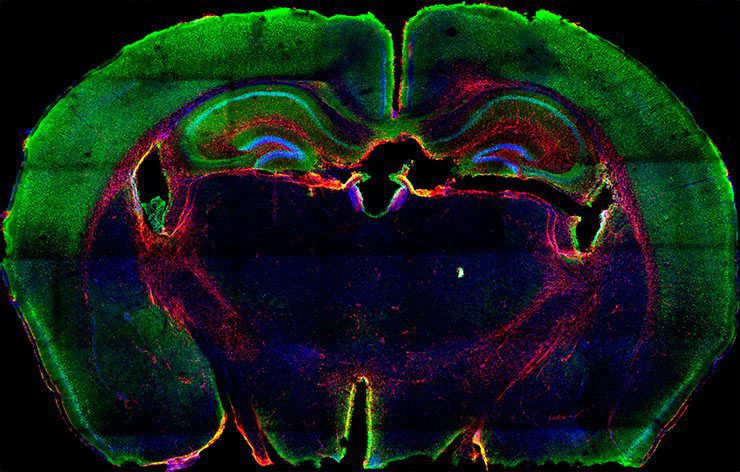 CAS9 (green) and GFAP (red) expression in a coronal section of a TVA/Cas9 mouse brain. /CNIO

“A current high priority in cancer research is to functionally validate candidate genetic alterations that are relevant for cancer progression and treatment response. In order to do so, it is essential to develop flexible models that can speed up the identification of cancer driver genes among the large number of passenger alterations”, state the authors.

In order to achieve this, researchers led by Massimo Squatrito combined two technologies – the genome editing tool CRISPR-Cas9 and the gene delivery system RCAS/TVA – to generate a mouse model that brings the possibility of mimicking the genetic complexity of cancer. Barbara Oldrini and Álvaro Curiel-García, co-lead authors in the study, used this novel model to recapitulate some of the genetic alterations found in gliomas.

In particular, they studied a gene fusion encoding a family of kinases called NTRK and a common mutation of the BRAF gene, both identified not only in glioma but also in other tumour types. “What we have shown using this new model is that we now have the ability to generate specific complex genetic alterations and to study how they contribute to glioma pathogenesis”, explains Squatrito.

Moreover, the researchers used these models to study different therapeutic approaches currently used in the clinic and to analyse the mechanisms of resistance that could lead to tumour recurrence. Based on their findings, they suggest possible alternative treatments that might be used to overcome the acquired resistance to TRK and BRAF inhibitors.

“We can efficiently recreate a variety of genetic alterations, including gene translocations and point mutations, and we can move fast from the mouse model to the translational studies”, explains Squatrito. “Here we have shown that this approach is feasible and we believe that such a flexible model will greatly accelerate the pre-clinical testing of novel targeted therapies”, he concludes.

This work has been funded by the Seve Ballesteros Foundation, the BBVA Foundation through a Leonardo Grant, and the “Acción Estratégica en Salud” of the Spanish National Research, Development and Innovation Plan, Instituto de Salud Carlos III (ISCIII) cofounded by the European Regional Development Fund (ERDF).